The sonics are fascinating, the songs dark interwining works with odd electronics and insertions. — The Squid’s Ear, USA

Very strange, but in a comfortable way. — Hour, Québec

A universe of pop, at once hard, alien and poetic, unstable friends was built on the successive contributions of each member of the trio. An exquisite corpse in the open air, the music of bob is built from digital songs reconciled, like so many laboratory monsters. Dark beasts that Mary Shelley would not have despised. 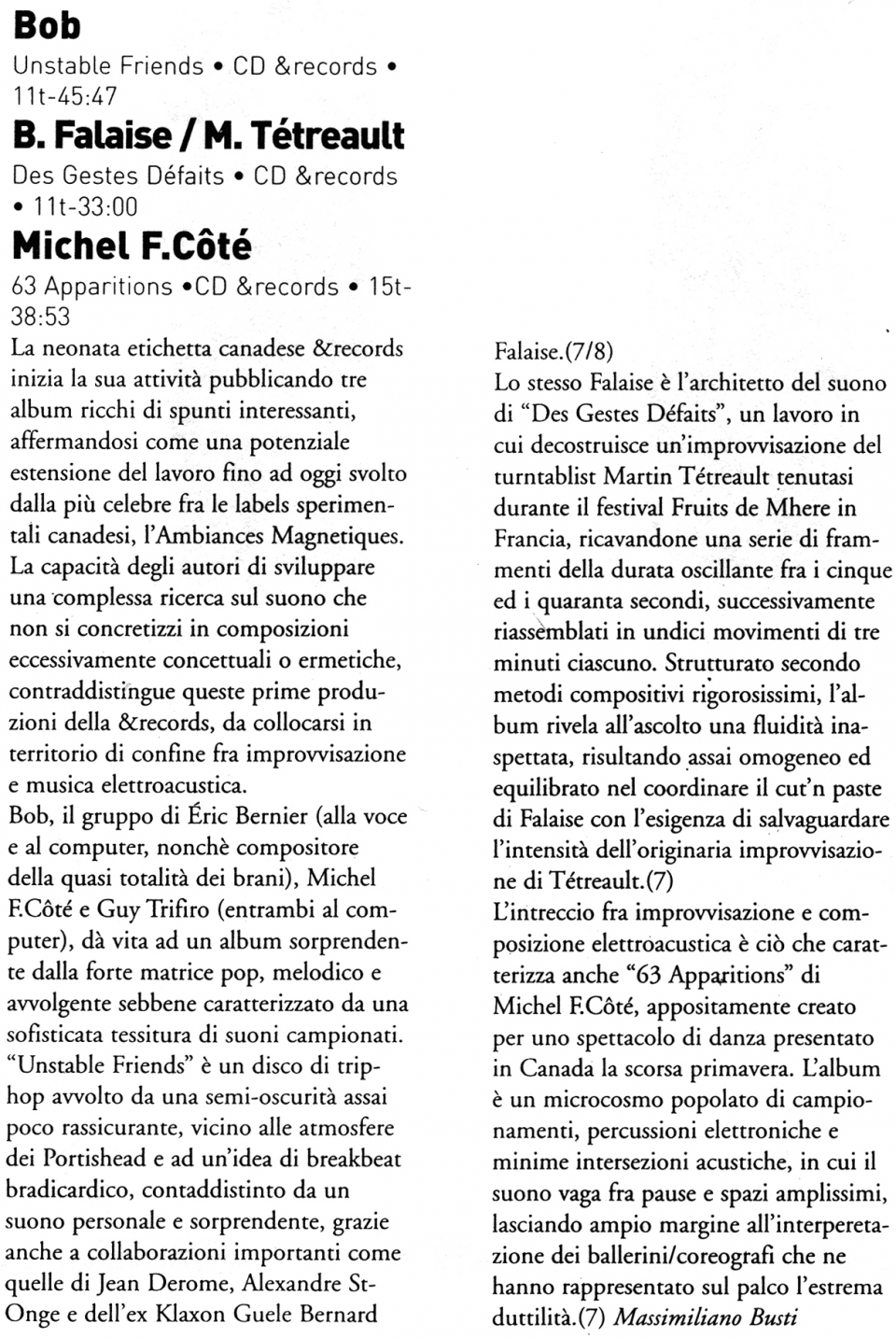 The sonics are fascinating, the songs dark interwining works with odd electronics and insertions.

Bob is the trio of Éric Bernier, Michel F Côté and Guy Trifiro, who utilize computers and machines (what types of machines are not specified in the liner notes) to create a symphony of memory dust balls. You know what I’m talking about. Memory dust balls are those half (or less) remembered events of childhood, snatches of songs, fragments of old conversations that we all have floating around upstairs. Listening to the 11 pieces on this album is like delving into a vat of those memories, played on an old tube radio and set to a rocking beat. Very strange, but in a comfortable way.

Very strange, but in a comfortable way.

As we begin this series of articles on various catalogue-related themes, why not start with the hardest artist to pin down from the Ambiances Magnétiques collective: prolific and eclectic drummer Michel F Côté.

A late arrival to the Ambiances Magnétiques roster (joining in 1988), Côté readily put himself on the fringe of various geometrically variable groups. He could be heard for the first time in the debut Bruire album, Le barman a tort de sourire, a surprise box with no less than 14 guest musicians. Bruire is Côté’s very poetic project-group, in which he plays with the language of avant-garde, song and ambient music. This album launched a trilogy which continued in an increasingly mature vein with Les Fleurs de Léo, to end with the unforgettable L’âme de l’objet. This travelling in three steps has given us the chance to hear collaborators such as Geneviève Letarte, Jerry Snell, René Lussier, Ikue Mori, Claude St-Jean and Jean Derome, all of whom helped to feed our drummer’s fertile imagination.

More than six years passed before a new Bruire project could be heard, this one a very different beast: Chants rupestres, an improv quatuor with Jean Derome, Normand Guilbeault and Martin Tétreault. In fact, during these six years, Côté had been working on other projects which were increasingly more… deconstructed. The first sequels of this could be seen in a collaboration with Diane Labrosse, a slightly obscure CD purposely entitled Duo déconstructiviste. And if the first (double) album from his new project Klaxon Gueule, Bavards, was to sport a fairly recognisable “rock” energy, this project would soon see Côté at his most abstract.

The least we can say is that the release of Muets, a shiny minimalist jewel completely at odds with Bavards, would be a surprise to most listeners. One thing was for sure though, this new CD, released in 1999, was certainly more in phase with its era than the Duo déconstructiviste which was, in retrospect, perhaps too much in advance on its time. But this change was also due to the aesthetic evolution of doublebassist Alexandre St-Onge who, from a relatively “classical” playing, was to suddenly turn to a rather more conceptual approach towards his instrument. Côté and guitarist Bernard Falaise were thrilled to follow their bandmate in this new direction. Their latest album, Grain (recorded with Sam Shalabi and Christof Migone), confirmed this tendancy while pushing it even further into sophistication, making this work one of Côté’s most accomplished of his discography.

But the drummer did not stop there and reappeared where no one was expecting him. Thus, with Éric Bernier and Guy Trifiro, he created a new group, Bob, whose new disc, Unstable Friends, just came out. Under some fairly deviant and attractive cover artwork, a return to the bizarre “pop” music from Bruire’s beginnings is taking shape! We also heard through the grapevine that a new project called Mecca Fixes Clock (in which we can recognise the composer’s initials!) which could be described as orchestral ambient. Is Côté returning to his first loves?

If it isn’t so easy to give an overview of Michel F Côté as a musician, then that might be because his work goes beyond just music. In fact, one can often hear our protagonist at the theatre and in performance art, with such creators as Robert Lepage and Catherine Tardif. This aspect of his work finds its echo on Compil zouave, so far the only disc released under the composer’s name. We should also mention Côté’s previous involvement as a radioshow host at Radio-Canada amongst others, and his writing for contemporary arts magazine Esse.

Michel F Côté may best be seen as a kind of barometer of Ambiances Magnétiques’ creative activity throughout the years: from the song-form experiments of the 1980s through the peculiar lyrical impro-composition which was the signature sound of the AM catalogue in the 1990s, to continue with a more extreme form of improvisation, based on the physical existence of the instrument.