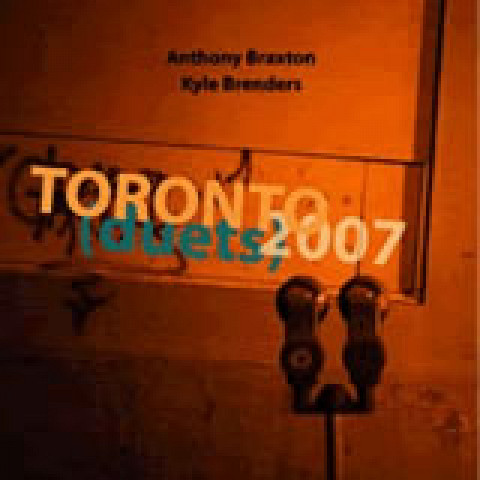 Its interest lies in aspects other than the spectacular. — Signal to Noise, USA

“To call a musical duet a “dialogue” implies that the music functions the way language does. The comparison is particularly tempting in the case of Anthony’s music and the “language” types that are its building blocks. Any comparison here, however, has little to do with the well-worn paths of call-and-response that may remind us superficially of conversation. It’s better, perhaps, to think of duet music in general as a historical language and of Anthony’s pieces as a beautifully original dialect in which to say what he and Kyle need to say, to each other and — thankfully — to us.” 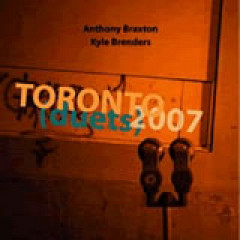 Its interest lies in aspects other than the spectacular.

It’s common for young musicians to do projects of music by their heroes just to pick up the vibe and, maybe, some reflected validation. But saxophonist Kyle Brenders takes this gambit to a whole other level by recording compositions by his mentor, modernist visionary Anthony Braxton, with the man himself. Breathtakingly audacious, yes, but when listening to this 93-minute, two-CD release it becomes apparent that the twosome are technically well-matched. This balanced pairing perform two of Braxton’s uniquely imaginative pieces with energy, precision and creativity. Long composed parts are executed with vigour, yielding to improvised sections that flow logically from the preceding notated materials. And it’s the improv sections where Brenders shows he is thoroughly equipped to lock horns with the master on his turf and at his level. By turns, the pair act as foils/accompanists for one another, finishing phrases and inspiring and/or goading each other to further heights. Recommended.

Fans of Braxton and his GTM surely will recognize the format. For the uninitiated, paraphrasing Supreme Court Justice Potter Stewart’s characterization of pornography fits best: “I shall not attempt define it, and perhaps I could never succeed in intelligibly doing so. But I know it when I see it.” Same with GTM, as explained by Braxton himself; it’s music with no beginning and no end. And like a flowing river, it’s impossible to step into the same GTM song twice (apologies to Heraclitus).

This trimmed GTM format cuts to the essence of the music. Braxton is joined by Canadian saxophonist Kyle Brenders, a student at Wesleyan University where Braxton teaches, who at times seems to be a cross between Evan Parker and Steve Lacy. Braxton and Brenders skate together through the composed themes, which can be both hypnotic and, at times, a source of vertigo. The tension accumulates when each accompanies the other or plays off the other’s improvisation. Like other like-minded disciples of the Braxton system such as hornist Taylor Ho Bynum, guitarist Mary Halvorson, or saxophonist Steve Lehman, Brenders clearly has a bright future in music. The discipline and freedom within this system is quite impressive.

These two lengthy compositions are valued additions to the Ghost Trance Music mystique. The charm and allure of this music may be its defining of a sound with no beginning and, hopefully, no end.

The charm and allure of this music may be its defining of a sound with no beginning and, hopefully, no end.

Across two discs, Braxton and his former pupil Brenders, both on saxophone and other reeds, interpret two pieces of Braxton’s fascinating ghost trance music. Braxton’s compositions are colourful and thoroughly engaging, offering a bridge from Ornette Coleman to Webern, with a battery of extended techniques to fill things out. The pieces contrast recurring, driving unison (or quasi-unison) sections with starker passages — rapid, speech-like squalls with loosely interwoven melodies. The most beautiful feature of the two works is how they retain a strange semblance of cyclical structural “integrity” while giving the sense that the whole form is disintegrating. Plenty of scope is left for both players to bring their vocabularies to the table. This is especially evident when each piece arrives at its climax, and least sober-point. Slippery and elusive, these sections navigate a spooky psychedelia rather than unleashing a macho free-jazz onslaught. The elder saxophonist’s trademarked pinched sound finds a great match in Brenders’ singingly warm tone. Both extremely curious about their instruments’ capabilities, each tints and taints (in the best way possible) the two works with assorted soggy whispers, hoarse multiphonic wheezes and serrated barks.

Slippery and elusive, these sections navigate a spooky psychedelia rather than unleashing a macho free-jazz onslaught.

Anthony Braxton has been up north of the border a fair bit lately: he’s been a guest at both the Victoriaville and Guelph festivals, and has forged an alliance in this city with the AIMToronto collective. The live double-CD Toronto (Duets) 2007 contains two 45-minute performances of his Ghost Trance compositions in the company of saxophonist Kyle Brenders. Composition 199 is a jogtrot quarter-note spiel that’s very much in the mode of Braxton’s early GTM; indeed, a glance at Jason Guthartz’s discography suggests that, though it seems to be previously unrecorded, it must date from the mid-1990s. The other piece (Composition 356) is an “Accelerator Whip” GTM piece that already received an airing on the mammoth Iridium set from Firehouse 12, its constantly shifting proportional rhythms sending the players on a bumpy rollercoaster ride. Both performances leave the GTM tramlines fairly quickly, leaping off into a forest of contrasting episodes; the players are particularly good at playing foreground/background games, so that you’re constantly shifting from hearing their interaction as mutual dialogue or as solo-with-accompaniment. When he’s on soprano, Brenders sometimes mimics Braxton’s skittery loopdeloops but more often tends towards a melodic forthrightness out of Steve Lacy (in town, he frequently plays with The Rent, a Lacy covers band); on tenor he’s more of an Evan Parker man, his tone gruff and grainy. A few of his licks are distractingly derivative (especially his recourse to Parkerish burblings), but what matters is his great ears and his wholehearted response to the very plastic character of Braxton’s music, the way it seems to be buffeted by strange gusts of anger and hesitancy and delight or to suddenly become soft and languid. Given that this year has been even by Braxton’s standards a prolific one for releases — an amazing nineteen Braxton CDs and one DVD were reviewed in the Fall 2008 issue of Signal to Noise alone — there’s some danger of this one falling through the cracks, which would be a shame: there are passages here that are among the most enjoyable I’ve encountered in latterday Braxton, like the deluge of slithering arabesques that occurs near the end of Composition 199.