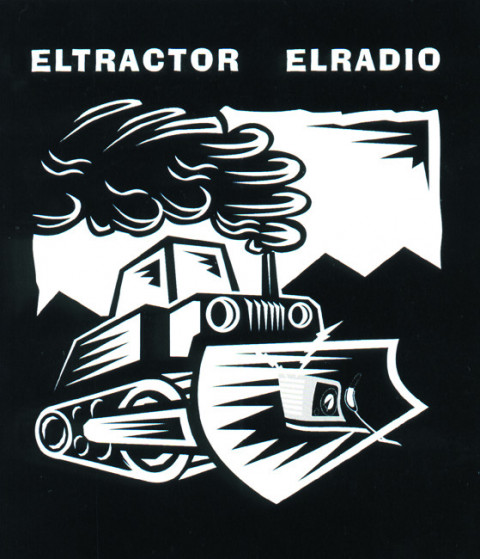 Eltractor, which has existed since 1996, is a group that improvises in audio and video simultaneously. Formed by videographer Boris Firquet and musicians David Michaud and Fabrice Montal, it now presents Elradio, a collection of pieces that it has dug out of one of its sound excavations, composed in real time during audio-visual improvisation sessions, recorded at home, and then improvised again before being remixed during Eltractor’s brief residence at Avatar. Also at the worksite are secret mystery guests like Marc Tremblay, Jocelyn Robert, and Martin Meilleur.

This item is not available through our web site. We have catalogued it for information purposes only. You might find more details about this item on the OHM / Avatar website. 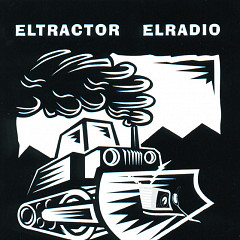 As last week’s review of Eltractor’s Elradio made clear, a plain-old audio CD doesn’t do this group justice; while it’s an adequate medium for spotlighting the efforts of audio wizards David Michaud and Fabrice Montal, improvisational video artist Boris Firquet is left in the cold. DomUSticks IDEOTRONs attempts to redress that balance, offering four of the group’s audio-visual compositions for computer-based viewing.

This actually works quite well, though it helps to have some experience with CD-ROM-based interactive material, as domUSticks IDEOTRONs lacks a clearly-delineated navigational system; indeed, finding the videos is a challenging pixel-hunt the first time around. The four videos themselves make it worthwhile, yielding more than half an hour of quick-cut imagery and animation, combined with music that has more in common with IDM, and the work of video-improv pioneers like EBN, than with the rest of the OHM/Avatar stable. The images fly past — bats, hummingbirds, cataract surgery, electrical schematics andall sorts of animation, all of them decontextualized and heavily effected. Of the four, the best piece is probably Steno-Bongo, which pairs a vigorous bleep-blip workout with a constantly moving, morphing series of diagrams.

Assuming that you don’t mind using your computer as a source of non-interactive entertainment rather than a work tool, domUSticks IDEOTRONs delivers a pleasingly immersive experience.

Diving into experimental, improvised music can be a risky venture. Without knowledge of the artists involved, you never know whether you’re about to buy a fascinating series of sound collages or a recording of someone pushing toy trucks down a flight of steps. It’s fine if a disc isn’t musical, in any conventional sense of the word, as long as it’s interesting.

ElTractor, a group of like-minded audio and video artists, knows how to be interesting. They even know how to be musical. They’ve structured ElRadio, a series of studio-tweaked real-time improvisations, like a conventional album, giving each of the disc’s nineteen pieces a manageable — if not downright fleeting, by “art” standards — length. While a few of the pieces make relatively difficult listening (Exorcisme Rond springs to mind), ElRadio is refreshingly free of the “endurance test”-type material that many sound artists use to frighten away weak-willed newbies. It’s not a disc you’ll hum along to — at least, not very often — but it won’t drive you to suicide, either. Its sonic textures are intriguing, mixing music and dialogue samples, “found” audio, instruments and voices to frequently fascinating effect.

ElRadio is nothing if not variable. One minute you’ll be listening to Retard Tard’s punishing combination of industrial drums and industrial machinery; the next you’ll be in Easy’s creepy world of keyboard chords, cartoon and television samples, and dreary horror movie ambiance. And that disturbing, slowed-down voice? Sure sounds like John Wayne, doesn’t it? Throughout the album, there’s a sense that all of ElTractor’s compositions are built from familiar elements, obscured by only the most casual of disguises; you’re compelled to listen again and again, aware that you’re on the brink of “cracking” a naggingly familiar sound source. This jigsaw-puzzle complexity gives ElTractor’s music a life beyond that of more sedate electroacoustic pieces, which can rarely be described as “fun”.

When musical instruments are allowed to take center stage, the results are surprisingly mix-tape friendly (as long as the tape in question is going to an open-minded, IDM-loving friend). Rien is far more than its name implies, thriving on a jazzy, chaotic blend of piano, drums and horns, while Fumette Vindicatrice makes effective use of an upright bass melody. If you’re feeling more adventurous, witness the piano-devolution of Évidence, which pulls familiar sounds into alien territory.

While even these comparatively accessible works will likely prove intractable for many listeners, my only real beef with ElRadio is that it doesn’t give us the full spectrum of ElTractor’s work. We hear the work of audio boffins David Michaud and Fabrice Montal, as well as contributions by familiar names like Jocelyn Robert and Marc Tremblay, but video artist Boris Firquet is not represented here. Fortunately, his efforts are addressed on a separate release (which we’ll cover next week).

All told, if you’re ready to venture beyond the sonic event horizon, ElRadio is the way to go — a powerful kick in the ass for your tired musical worldview.