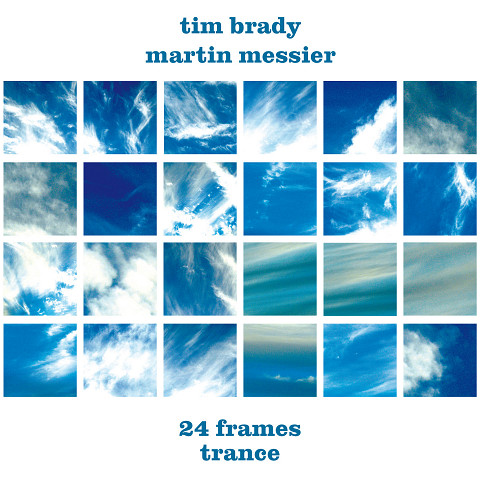 Massive booming, enigmatic suspensions, evocative plateaus where the possibilities of a treated source are multiplied until the starting sound grows into a monster capable of killing, but also striking points of marvelous resonance, stunning us for a few seconds. — The Squid’s Ear, USA

24 Frames — Trance is composer and guitarist Tim Brady’s 16th CD, and the second to include a companion DVD, a document of his continuing multi-media collaboration with video artist Martin Messier.

24 Frames — Trance is a music of hypnotic states, of altered guitars, of 6-string alchemy, of virtuoso performances and compositional subtleties.

24 Frames — Trance is the first release of a planned series of 3 CD+DVD releases, creating a large-scale work for solo guitar and other media, with almost 3 hours of new music by one of the most influential composer/guitarists working today.

Trance — driving rhythms and a stunning solo melodic improvisation, over an orchestra of up to 35 electric guitars

Sul A — an intense and mysterious soundscape, focussing on the sound of a single string (A string) to build its dramatic structure

Switch — 5 short movments, each exploring a different approach to solo guitar and electronics

O is for Ostinato — relentless arpeggios combined with simple electronics create an Escher-like swirl of harmony, pulse and timbre.

Invisible Quartet — music in slow motion, music of the spheres, based on a radical re-working of a single sample of a glissando by a string quartet in dialogue with heavily processed electric guitar textures. 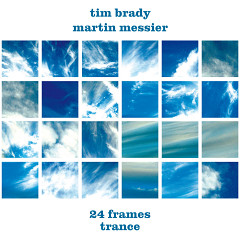 In a recent Guitar Player feature, Tim Brady jokes about the fact that Brahms never wrote stuff for electric guitar, ironically justifying a relentless quest for the instrument’s potential residency in the empire of commonly accepted “serious” music. This double set — part of an ongoing series — is an intriguing proposition in that sense. On a compact disc lie six of the twenty-four Frames; on the DVD the same compositions (“for electric guitar, electronics, samples, multitrack technology and video”) are accompanied by Martin Messier’s experimental imagery, which comprise computerized abstraction and disfigurement of relatively normal films, such as a woman walking with difficulty in a snowy town.

Brady recorded all the parts himself, a herculean task that — in his words — sometimes requires years just to find the right tone for a short cut. Unluckily, the artistic consequence of this sort of agony is only partially agreeable. Chilly linear materials and pitilessly pitch-transposed counterpoints summon up a combination of frozen heaven and dissonant hell, ultimately negating a definite position to the work. Think of a motorized King Crimson zombie to have an idea of the totally bloodless interlocking of different lines, sporadically escorted by peripheral undercurrents. Angular arpeggios, overdriven alien themes, plucked clusters and the obsessive repetitiveness generated by dozens of superimposed axes are perceived as rather conventional anomalies that don’t enlarge our database for this field, resulting interesting in spurts — and utterly unemotional.

Where the Canadian really excels is in the creation of atmospheric sonorities and breathtaking milieus. Massive booming, enigmatic suspensions, evocative plateaus where the possibilities of a treated source are multiplied until the starting sound grows into a monster capable of killing, but also striking points of marvelous resonance, stunning us for a few seconds. Too bad that those dreams are often broken by the recurrence of a cerebral kind of assault that situates the record in the infinite archive of “over-average-yet-unmemorable” releases, in total disproportion to the incontestable compositional effort.

Massive booming, enigmatic suspensions, evocative plateaus where the possibilities of a treated source are multiplied until the starting sound grows into a monster capable of killing, but also striking points of marvelous resonance, stunning us for a few seconds.
Tim Brady sait encore une fois nous captiver. 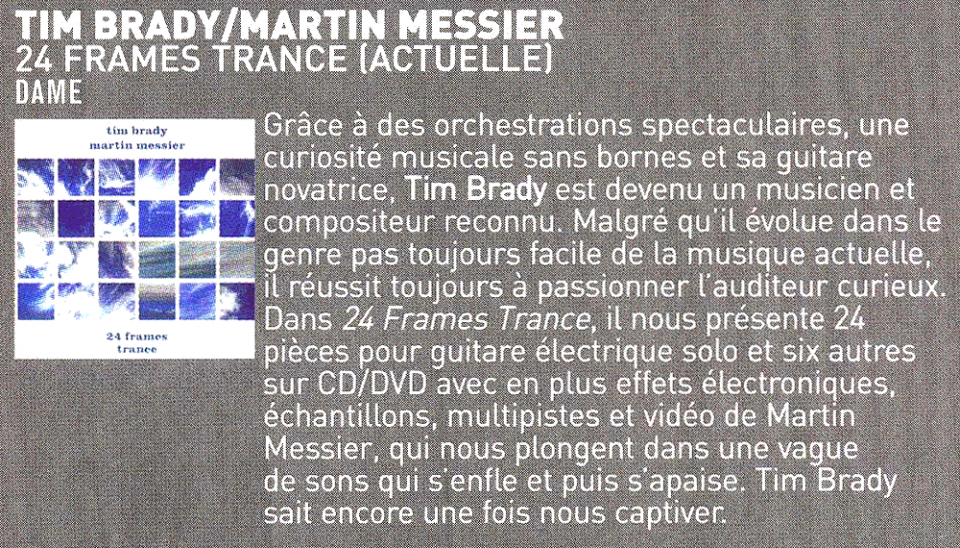 Brady is a master technician
Canadian guitarist and composer Tim Brady has been doing his best to increase the electric guitar’s presence in classical music since 1988.

57 Ways of Playing Guitar sounds like a summary statement.

24 Frames is a series of 24 pieces for guitar written over the past few years. 24 Frames: Trance is the first installment in a triptych documenting the whole cycle. This first release is actually part three, featuring the compositions Frame 19 up to Frame 24, all for electric guitar, electronics, and video (by Martin Messier) — hence the CD+DVD format. Messier’s videos are interesting abstract works, though not essential to the music (except perhaps for Frame 24: 57 Ways of Playing Guitar). Brady delivers virtuoso performances and deploys treasures of original techniques. This record puts him (once again) on par with Fred Frith and Nick Didkovsky. 24 Frames: 57 Ways of Playing Guitar in particular makes him worthy of the title of guitar hero. A splendid record that goes straight to the essence of Brady’s aesthetics. I’m eagerly awaiting the other two installments.

This record puts him (once again) on par with Fred Frith and Nick Didkovsky.