You’ll feel the music’s effect all around, in the trees, in the mockingbird’s tune and in your own skin. — The Squid’s Ear, USA

They practice in secrecy, like healers or mediums. Their music is lively, moving, almost “tactile.” The keywords describing Nous perçons les oreilles are: animal, extra-sensory perception, focus, instinct, intimacy, openness, play, presence, rawness, resonance, risk, sincerity, tearing. This is a rather peculiar duo, down to its very instrumentation. There is a certain symmetry at its core: two alto saxophones improvising together, but the sax players also sing, one relaying the other to a point where, sometimes, there is no way of knowing who plays what. A hall of mirrors, symbiotic work. A duality blending into one, just as two ears sending different and complementary signals to the same brain.

Following Nous perçons les oreilles and La vie, c’est simple, their third album is entitled Shaman because, without claiming that ancestral art, they firmly believe that their work is closer to the world of healing, supernatural communication, and ancestral memory than the world of “entertainment” - the infantilizing disgrace art is turning into.

“Shaman because, without claiming that ancestral art, we firmly believe that our work is closer to the world of healing, supernatural communication, and ancestral memory than the world of ‘entertainment’ — the infantilizing disgrace art is turning into.”

Saxophonists Jean Derome and Joane Hétu have created a forty-eight minute masterpiece with Nous percons les oreilles. Through horns, flutes, objects, squeaks, beeps, cries, exclamations and songs, these two French Canadian artists have conjured up the earth’s hidden spirits and demons, fleshed them out and transferred their language through twelve unnamed tracks which can only be distinguished by their time length.

The improvisational shamanic folk in this album is possessed. Opening up, the alto sax is like a morning bell, awakening and demanding. Through the next few tracks, the aggression builds with glitchy improv screeches and beeps, yet the patterns of noise almost resemble an unknown speech that few can decipher, let alone communicate with. Throughout the album the music returns to calm distorted moans and gentle flutes — the invoking of the dead ancestors and the folktale myths. The record ends with lowly growls, rapid breaths and teetering barks — welcome to our universe!

Derome and Hétu’s album draws slight comparisons to groups like Wooden Wand and The Vanishing Voice, particularly with the earthy tones, native folk and improvisational jazz elements. Appropriate listening: anywhere, but particularly outdoors, surrounded by nature’s animals and creation. You’ll feel the music’s effect all around, in the trees, in the mockingbird’s tune and in your own skin.

You’ll feel the music’s effect all around, in the trees, in the mockingbird’s tune and in your own skin.
Cris, onomatopées, souffle haché, riffs torturés, parfois bruitistes concourent à l’élaboration d’une nouvelle musique tribale. 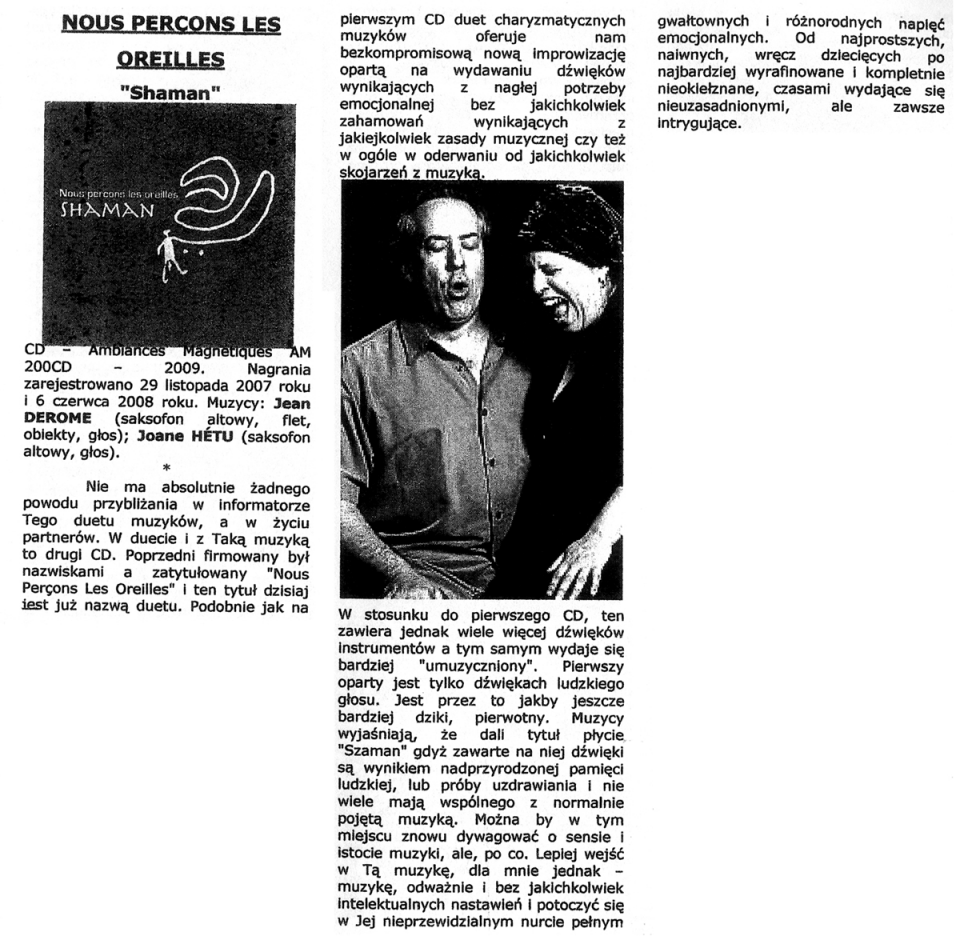 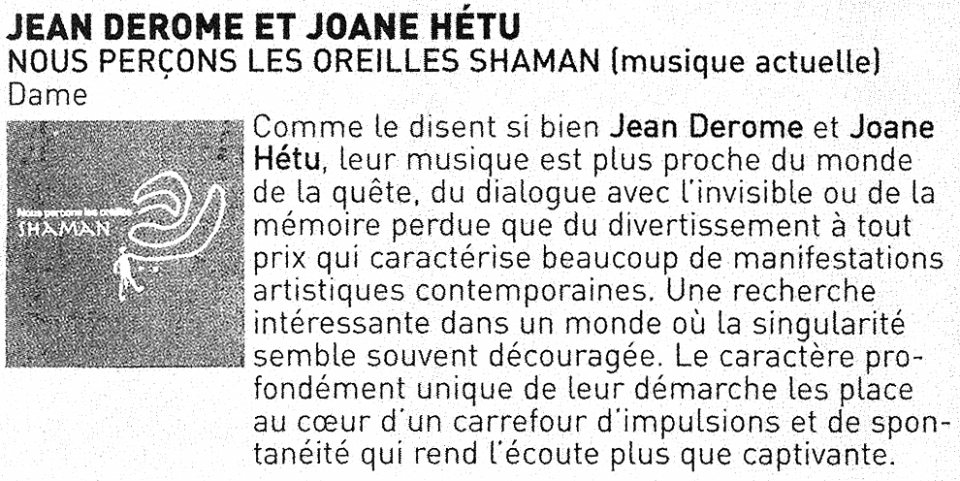 A weightier Canadian balance to the international sounds is the exclusive-to-VTO triple bill at the Tranzac club May 14. The Rent and Hat + Beard are locals, while Shaman from Montréal is also on hand. Consisting of Jean Derome and Joane Hétu on woodwinds, voices and objects Nous percons les oreilles Ambiances Magnétiques AM 200 CD exposes Shaman’s strategy of D-I-Y ethnomusicology. Like ancient tribal healers the duo expresses itself through verbal screams, squeaks, murmurs, mumbles and cries as well as inchoate instrumental textures. The two recount 12 short narratives which are as much Dada as primitive, wrapped in onomatopoeia that bonds mouth expressions such as cheers, yelps and gurgles with slide-whistle peeps, unsequenced altissimo saxophone stridency, key percussion, clipping chromatic timbres and reverberating body tube echoes.

Like ancient tribal healers the duo expresses itself through verbal screams, squeaks, murmurs, mumbles and cries as well as inchoate instrumental textures.

Nous perçons les oreilles is Jean Derome and Joane Hetu. They present their next step under this name after a silence of about eight years. Shaman is their third work. We hear Hetu on sax and voice. Derome also on sax and voice plus flute and objects. Emotional and intense improvisations. With the title Shaman they want to hint at their conviction that their work is “closer to the world of healing, supernatural communication, and ancestral memory than the world of entertainment.” 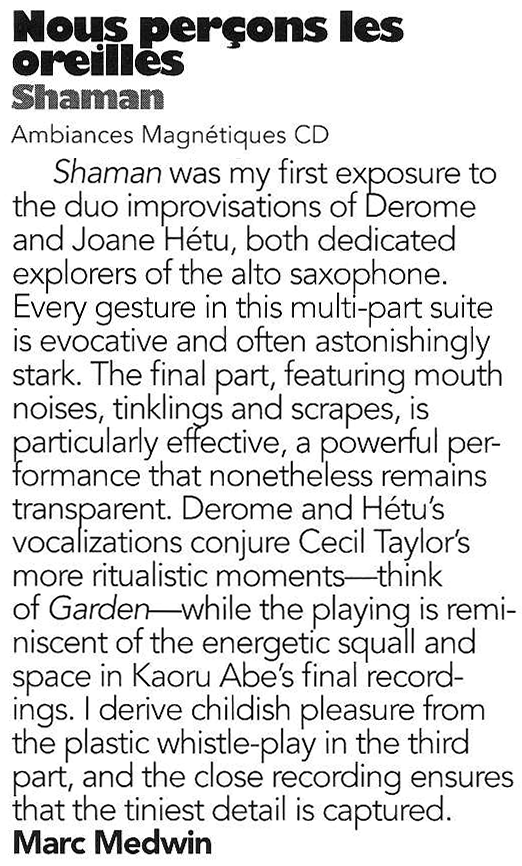 2nd listen: A splendid free improvisation record, not at all the wacky thing some might be fearing. Short inspired duos, with lots of mouth sounds and small objects and toys, all approached in a very serious manner. This is not the record I was expecting from Joane Hétu and Jean Derome, it’s even better. La vie, c’est simple, their previous album, will still hold a special place in my heard, but this Shaman is bewitching. Bravo.

Speaking of experimental vocalists, here is Joane Hétu and her inseparable partner (in music and life) Jean Derome, with a new CD by their duo Nous perçons les oreilles – the last one goes back to… wait a minute… [seeps through his music library]… 2002!?! Well, it was about time! On the surfce, Shaman is closer to their first (eponymous) album than to La vie, c’est simple – in other words, no songs this time around, only short improvisations (twelve of them, between one and six minutes in duration). Listening deeper though, Shaman is JUST AS different from the first two records as La vie, c’est simple was different from the first record, which goes to show how the duo keeps on evolving with time. The music is serious, intense (which doesn’t mean “noisy”), noisy (I know, I know, but “noisy” as in noise-based, not as in “a loud racket”), emotional, and atavistic since it arches back to a ritualistic yet a-rhythmic and a-melodic form of expression. Very impressive on first listen, and I’m looking forward to listen to it more attentively soon.