Piece in four movements (La neige (Snow), Jamais froid (Never Cold), Rafales (Gusts), Paysages (Landscapes)) written for acoustic and electric instruments Récits de neige invites the listener to a real snowfall performed by six musicians improvising masters who are familiar with the language of new music. This third installment of Winter Music offers an amalgam of sounds, images and stories intertwined in the winter. Touching and amusing anecdotes, told by the musicians and short songs, performed by all punctuate the winter road to strong sounds.

This item is also included in the Tryptique musique d’hiver box set (AM 904).

… this time out her interests in storytelling, both musical and quite literal, are wonderfully evocative.
In its ever-shifting linguistic textures and evolving musical language, Récits de neige marks a rare intersection of composer, group, and subject. 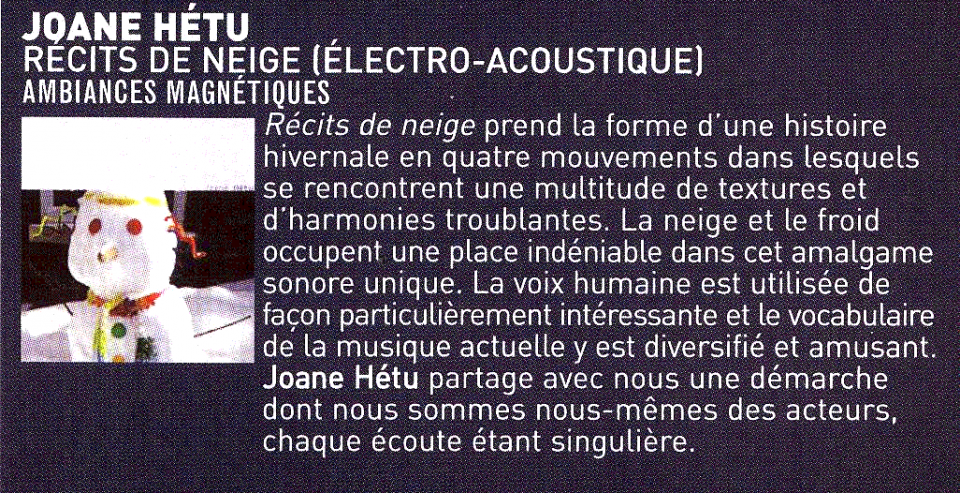 I am in love with Joane Hétu’s music, and I have been for a long time. And out of all her projects, her winter trilogy is the most enjoyable, accessible and moving. I recently saw her latest stage production La Femme territoire, which probably signals a new step in her artistic evolution. So it feels a bit strange to back down two years for Récits de neige, the just-out last installment in said trilogy. Once again, the work takes us from December through March in four movements culling winter poems and anecdotes said by the musicians (Hétu, Jean Derome, Diane Labrosse, Pierre Tanguay, Scott Thomson, and Alexandre St-Onge). Four movements picturing the serenity of the first snowfalls, the anguish of the dead of winter, and the frenzy brought by the approach spring. This project highlights Hétu’s melodicism, and memorable tunes abound on Récits de neige. This record could be the best in the trilogy (although I just love Musique d’hiver). The fan in me is thrilled.

I am in love with Joane Hétu’s music, and I have been for a long time. […] This record could be the best in the trilogy (although I just love Musique d’hiver). The fan in me is thrilled.