Throughout the 13 minimalist tunes the horns extend or amplify improvisations from the band’s core trio — The WholeNote, Canada

It is very rewarding and enjoyable to listen to all short movements and actions by the different players, and to experience how they intertwine into a strong nucleus of linear moving music. — Vital, Netherlands

A microscope aimed at the asperities,
And breaths trip upside-down breaking.
That explains the impact of those looks singing and burning bright.
The rumbles, the infinitely sounding,
A friend, a scream, following the threshold.

This trio formed in September 1995, and it hasn’t given up since. Bavards, a debut double album in ’97, Muets, its follow-up in ’99, and Grain in 2002 form a first triptych produced by Ambiances Magnétiques. In 2004, Chicken, an album of songs (but not really) is released by &records. After a five-year hiatus, the trio returns to Ambiances Magnétiques to release their fifth album, Infiniment (AM 194), which also signals a new acoustic focus. As was the case on Grain and Bavards, KG has augmented its core trio (drums, guitar, doublebass) with a wind trio (Jean Derome, Philippe Lauzier, and Gordon Allen). After standing the test of time, the close-knitted musical relationship between Côté, Falaise, and St-Onge is transcending genres and schools. Their separate music backgrounds encompass a wide spectrum of esthetics and a commanding level of versatility. Weddings, baptisms, funerals, engagements, graduations, dances, executions, bachelor parties, circumcisions — they did it all. Now, their hope is to give their first concert in an orbital station very soon. They are available for any occasion: flatf@videotron.ca

This item can be downloaded and/or listened to at klaxongueule.bandcamp.com. 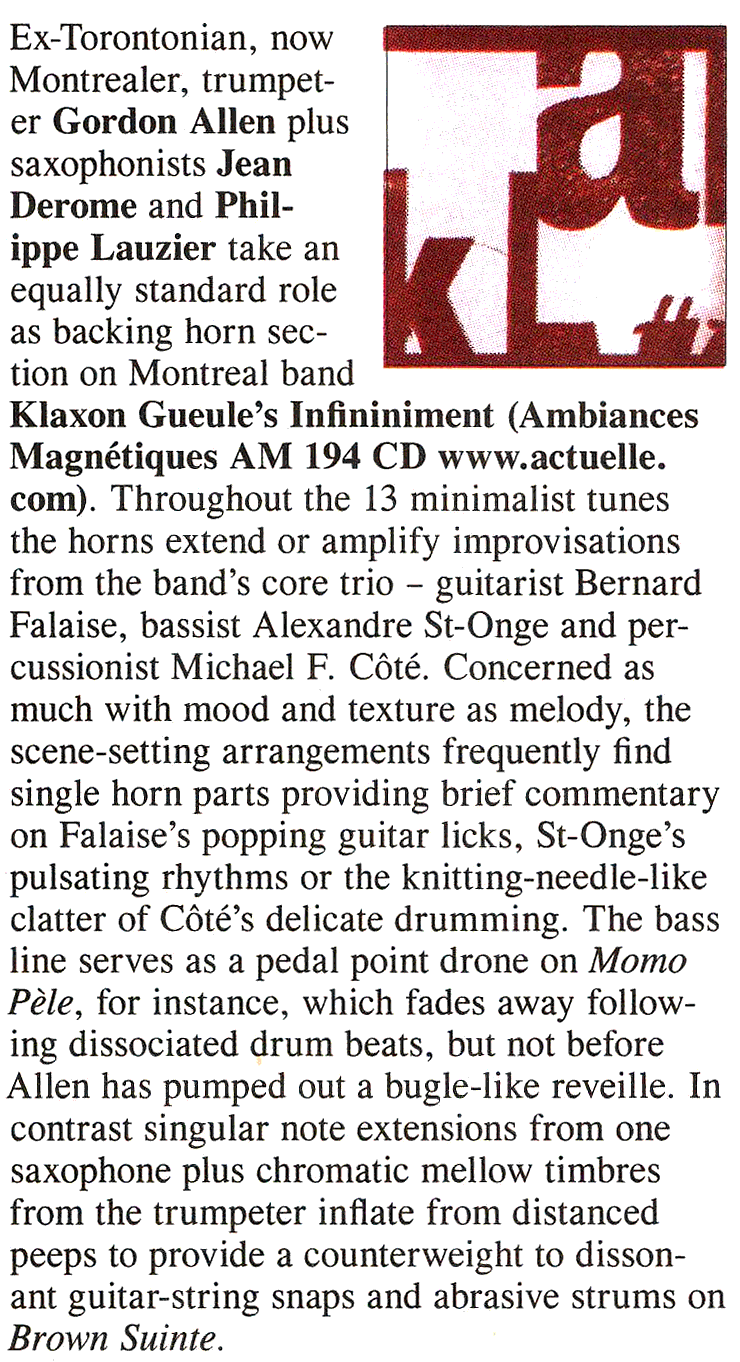 I’m always especially curious after new releases by Michel F Côté. He is a very interesting musician who deserves a much broader attention if you ask me. For instance for his fantastic Klaxon Gueule. This is Michel F Côté (drums, percussion), Bernard Falaise (guitar) and Alexandre St-Onge (bass). They started in 1995, and with Infininiment they are ready for their fifth statement after a silence of 5-year silence. Helped out by Gordon Allen, Jean Derome and Philippe Lauzier. It is not necessary to introduce the three core members as they are very profiled artists, all of them involved in numerous other musical projects. Klaxon Gueule combines these extraordinary talents who are very equipped to interpret Côté’s bizarre musical visions. In a very abstract manner his music stays linked with rock, and more explicit it shows relations with improvised music. It is very rewarding and enjoyable to listen to all short movements and actions by the different players, and to experience how they intertwine into a strong nucleus of linear moving music.

It is very rewarding and enjoyable to listen to all short movements and actions by the different players, and to experience how they intertwine into a strong nucleus of linear moving music.
The disc’s timbral exploration give new life to Côté’s always fine drumming, and make this a highly satisfying new disc. 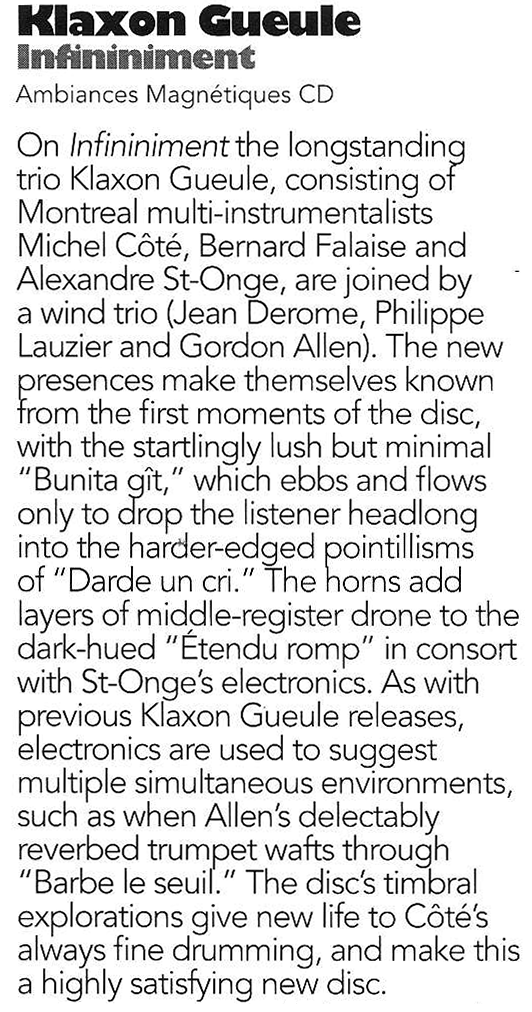 A stimulating exercise in free-improvisation.

Klaxon Gueule, a band that makes few albums but carries on and keeps on renewing itself. On Infininiment (no, it’s not a typo), the core trio — Michel F Côté, Bernard Falaise, Alexandre St-Onge — is joined by three guests: Gordon Allen, Jean Derome, and Philippe Lauzier. The group is still playing free improvisation sitting between the acoustic and the electronic, between sound and noise, between hard and soft. More soft than hard, actually, especially early on this CD, where the sonic matter feels like plastic left too close to the heater. Strange image? Possibly. Still, an intriguing record, almost captivating even. I’ll have to get back to it. A second listen is mandatory.

A second listen is mandatory