Wiens’ touchstones are not just the 20th-century’s avant-garde movements, but the language of the griot, of birds, of human breath — always moving backwards in search of origins. — Signal to Noise, USA

This is an album of solos and duets. Drawing inspiration from his research on African rhythms, Rainer Wiens has written complex pieces that have been magnificently performed by seasoned musicians from the Montréal new music scene.

”Over the years I had composed music that didn’t fit any of the groups I had. Instead of forcing them, I made small changes that would allow them to be played as solos.I also wrote several new pieces suited to the musical friends I wanted to record with, working with some new ideas for improvisational structures, non repeating scales and (apologies Mr. Messiaen) melodies bases on bird song. I also wanted to create something that people could come back to for nourishment of the spirit. My thanks again to Dino and the musicians for making the project a pleasure to realize.”Rainer Wiens, July 2009

The most powerful work on the CD is also the longest.

Wiens’ touchstones are not just the 20th-century’s avant-garde movements, but the language of the griot, of birds, of human breath — always moving backwards in search of origins. 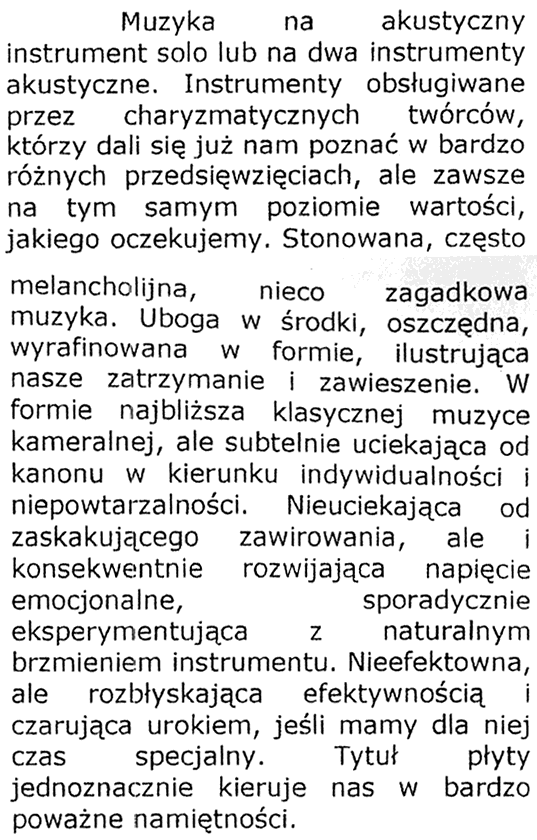 If I didn’t know better, I would’ve thought that this disc was a soundtrack to a native American psychedelic ceremony.

Guitarist Rainer Wiens has been diversifying his art in the past few years. Shadows of Forgotten Ancestors features his work as a composer. Eleven pieces, some short, some less short, written for other performers. Wiens himself only plays kalimbas on one track. The other tracks feature Jean Derome, Frank Lozano, Jean René, Joshua Zubot and Malcolm Goldstein, together or on their own. It’s pretty, dark, elegy-like in times. The man has a knack for composing graceful yet unique not-quite-contemporary-music-sounding pieces.

It’s pretty, dark, elegy-like in times. The man has a knack for composing graceful yet unique not-quite-contemporary-music-sounding pieces.

Guitarist Wiens exists quietly in the heart of Montréal’s creative music community. When he makes a move, it’s thoughtful and new. Wiens’s writing in this collection of 11 solos and duos gives his five interpreters intriguing direction and just enough open air to shape things their own way. A strong statement on beauty and aloneness, rendered with care and integrity.

A strong statement on beauty and aloneness, rendered with care and integrity.