Mankind plays with genre and expectation, mechanizing the meditative chant, challenging the trite pop tune, and going yet further: Mankind remains unruly, creating itself according to its own impulses. — Canadian Review of Literature in Performance, Québec

They create intriguing soundscapes in an lo-fi and trashy manner. — Vital, Netherlands

Mankind Manifesto: Our Weakness is our Strength. Experts at Nothing, We are Fresh and Naïve, Curious and Open to all Discipline, Media, Philosophy or Technique. That said, we have an Opinion on Everything and will Speak it regardless of whether it is asked of Us. We find Comfort to be Perplexing. We strive for Imperfection. We privilege an Equal Partnership with Technology. We will submit, on occasion, to the Will of the Machine but only in an Exploratory and Temporary Manner. We Know What We Are Doing. We recognize the trappings of the Feminine Condition, We favour its Benefits. We seek out Beauty as well as Trouble. Transcending the Palpable and the Impalpable, We are Mankind.

Ice Machine is the debut CD by Montréal duo Mankind, made up of word-sound digitizer Alexis O’Hara, and poet at large D. Kimm. The CD is short — its overall running time is 40:39, yet within that brevity it sprawls. Ice Machine blends electronic effects, a range of vocal expressions, riffs on the fairy-tale, the nursery rhyme, and the mafia film score. It incorporates storytelling, sound poetry, and sound-collage. It moves from seemingly improvised pieces to compact song-like works to longer, text-based explorations. The album includes bilingual tracks (English/French) and unilingual ones (English, French, Spanish), and as a result, has no dominant language.

The first piece on Ice Machine, Mile End Throat Singers recalls the rhythmic throat singing of Tanya Tagaq, and the layered breath-work of French sound-poet Henri Chopin, but it incorporates laughing and coughing, and employs delay and echo to enhance and abstract the sound of breath.

Track 7, Post Colonial plays on the meditation chant. The two voices, both chanting, weave in and out of harmony, and a third harmonizing voice emerges, that of “the machine,” conjured by electronics. Then, just as this track has established its serene mood, its serenity is undercut by a different type of meditation.

Track 8, Charming compiles a bilingual list of insults, ranging from the common (asshole) to the more imaginative and exemplary (microbe). Kimm’s and O’Hara’s voices alternate in this seedy, misanthropic exercise, but their voices never rise above an intimate conversational hum.

Track 4 Le Corps C’est Trop Physique and Track 10 The Anti-Rules flirt with pop — each has a chorus and a beat. But both tracks complicate any idea of facile, bouncy pop with their blasé tales of failed love, and their admissions of musically inexact singing sung in a child’s warble.

Despite its variety, Ice Machine feels like it could be a single long work, albeit one chopped into fragments, one in which those fragments have been shuffled and re-assembled. The sound is consistent throughout, with an icy electronic hum forming the sonic backdrop for each track. This hum is the sound we hear late on a winter night in downtown Montréal. It is the hum of electricity flowing through a million homes. It is the sound of the nocturnal city, and it can both comfort and menace.

Seduction, love, and confusion are themes that recur, in either D. Kimm’s world-weary, fluid delivery or in Alexis’ wry speak. Mankind plays with genre and expectation, mechanizing the meditative chant, challenging the trite pop tune, and going yet further: Mankind remains unruly, creating itself according to its own impulses.

Mankind plays with genre and expectation, mechanizing the meditative chant, challenging the trite pop tune, and going yet further: Mankind remains unruly, creating itself according to its own impulses. 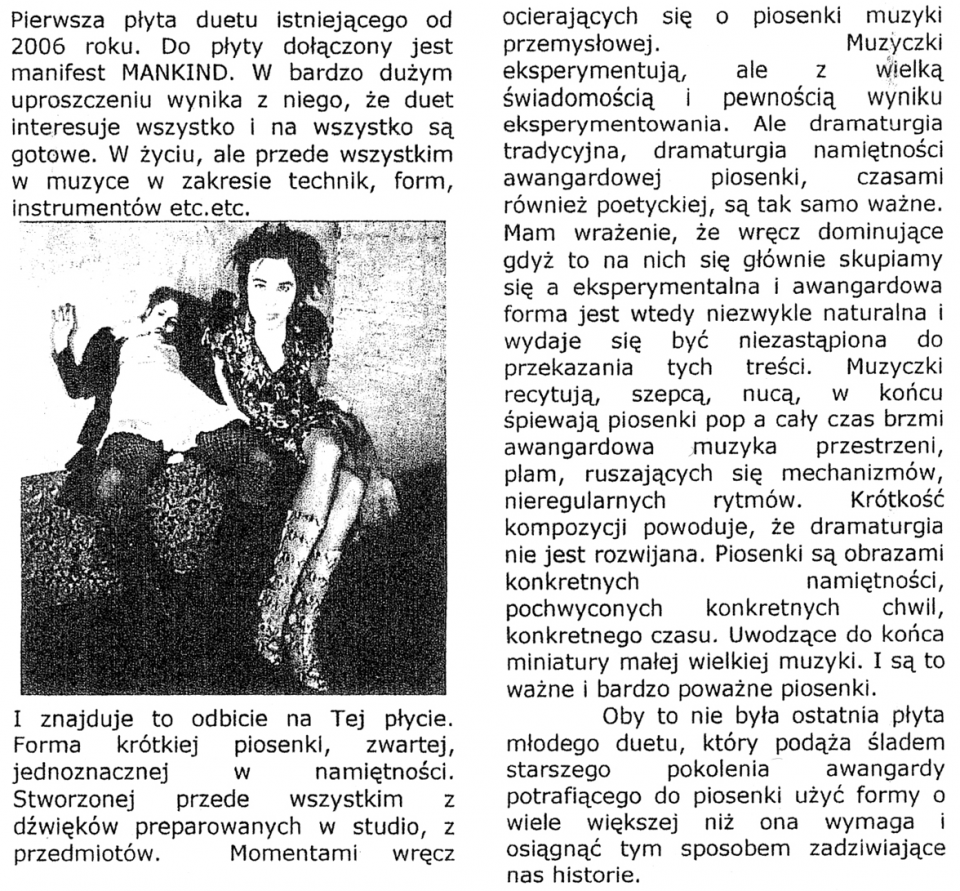 Mankind is the name of a duo that started in 2006 comprised of Alexis O’Hara and D Kimm. They combine sound poetry, noise improvisations and ambient plus performance into something of their own. Ice Machine‚ is the first result from their work. On stage the two multitalented, interdisciplinary performers use costumes, video projections, etc. to complete their multimedia art. It has been a long time ago since I found a manifest by the artists inside a record. But here we have one: "we are fresh and naïve, curious and open to all discipline, media, philosophy or technique. That said, we have an opinion on everything and will speak it regardless of whether it is asked of us." And so on. Although there french poems are not comprehensible for me, there is enough to be enjoyed here. They create intriguing soundscapes in an lo-fi and trashy manner. Very noisy ones like in the instrumental My favorite Agression, with drones like in Post-Colonial. Charming is almost a poppy song and The Anti Rules a chanson.

They create intriguing soundscapes in an lo-fi and trashy manner.

The Canadian duo known as Mankind [Alexis O’Hara and D Kimm] has produced my favorite CD of 2009. They combine a teen punk insouciance with an electronic sophistication presented in a raw lo-fi fashion that breathes new life into a corpse choked off all signs of life by the introduction of easy tools and electronic editing that has sucked all humanity and error from its soundscape. Trash poetry, scatology, cut-up techniques, Dada, punk noise aesthetics, voice transformation, literary and audio allusions, produce a work on the level of DJ Shadow, which means using a wide variety of techniques and resources readily available but perhaps neglected to create an aural manifesto that gives them their vitality. Its true dynamics comes from an ability to produce hi-fi using lo-fi aesthetics, to create an elegance out of a tapestry of audio detritus and communication strategies that are post-internationalist — they traverse numerous genres, tactics, languages and eras, which all evokes a Burroughsian dystopia that is not wholly without it compensations and rewards because paranoia and vision imply knowing the patterns and hypocrisies behind information and facing all of this head-on with their psych-sexual analyses of power and its media adjuncts. Live they present an evolving ad hoc multimedia performance using backdrops, video, costumes and this cut-up feel bleeds through on their CD.

The Canadian duo known as Mankind has produced my favorite CD of 2009.

Alexis O’Hara and D.Kimm make art that thrives on contradictions, in several senses of that word. From their backgrounds in poetry and theatre, the two women have developed an improvised approach to performance art that layers elements of noise rock, spoken word and absurdist humour in its creation. On stage, their stories and observations flow through several languages, ideologies and politics, with enough wit to deflate expectations either liberal or conservative in their leanings. On this debut recording, their musical constructivism is expanded upon and atmospheres that emphasize paranoia, physicality and desire are skilfully created. In interviews, O’Hara has expressed a wilful clumsiness towards electronics that plays a part in the discovery of improvisation. This further imbroglio of intent versus expression helps confuse, defuse and deepen meaning in the too often strident and narrow forms of mono/dialogue. This way, Mankind deliver their message(s) at odd angles with subtlety and humour before resistance is ever mounted.

Mankind deliver their message(s) at odd angles with subtlety and humour before resistance is ever mounted.

Finally, the collaboration between D Kimm and Alexis O’Hara has found its way on record. I saw this duo at FIMAV back in… 2007? 2006? Kimm and O’Hara are two multitalented poets/performer artists/sound artists. O’Hara tends toward derision and psycho-sexual sarcasm over a noise background; Kimm’s work is more nuanced, combining humour and tenderness, depth and pulsion. Together, they brew quite a sonic stew! Intriguing poems, coldish (hence the title) and occasionally trashy sound textures. Very well done.