A study in form, contrasts, colors, voices, lines, and harmonies at the center of which is Jean Derome’s saxophone soaring in fearless inventiveness. — The Squid’s Ear, USA

The Dangereux Zhoms are currently reaffirming their jazz roots, while maintaining a radical discipline of collective improvisation and sonic experimentation.

The Dangereux Zhoms are balancing imagination, humor, and physical playing. Their music is full of intense improvised passages and catchy tunes. It makes the music completely unclassifiable, which agrees very well with the group’s leader. As Derome said to Coda in 1995: “I’m playing music. Not jazz or any other genre per se; only music, period.”

In Exclaim!, Richard Moule described the musicians in this ensemble as “adventurous players who gracefully jump, straddle, and zigzag along every corner of the musical realm. Avant-rock, jazz styles ranging from Free to Bop and Cool, contemporary academic music, and funk only serve as springboards for their impish and creative excursions.”

Jean Derome et les Dangereux Zhoms was formed in 1992 for the opening concert of the 10th Festival international de musique actuelle de Victoriaville (FIMAV). The group gave many concerts in Montréal and Québec, and in major Canadian cities, in addition to appearing at around 10 international festivals (Germany, France, Slovenia, Croatia, Serbia, USA). In 2001, Jean Derome was awarded an Opus Award from the Conseil québécois de la musique, for his international career, both on record and on stage.

There are many interesting musical moments both quirky and serene throughout the disc, including the English word-based title cut and the setting of the La Fontaine fable La Grenouille et le Bœuf The Frog and the Ox”) that Cartier intones in fine-form expressionistic contortions. The best, however, is the longest: Prières Prayers”), a 25 minute piece that is a lesson in textures and the blending of voices and interweaving of the composed and the improvised. It features a piano solo accompanied by very spare band responses, then builds into a slow whirling of lines and textures that gives way to a trombone solo where Walsh gets the chance totestify”, then on to a drum solo and more building, with, from time to time, solo statements taking the upper hand. Then a return to piano solos and more development of motives wrought into the earlier exposition. A study in form, contrasts, colors, voices, lines, and harmonies at the center of which is Derome’s saxophone soaring in fearless inventiveness.

A study in form, contrasts, colors, voices, lines, and harmonies at the center of which is Jean Derome’s saxophone soaring in fearless inventiveness.

Jean Derome returns with another CD with his Dangereux Zhoms. After a silence of ten years, now the fourth CD by this ensemble sees the light after Carnets de voyage (1994), Navré (1995), and Torticolis (1998). With Tom Walsh (trombone), Guilaume Dostaler (piano), Pierre Cartier (electric bass), Pierre Tanguay (drums) and Derome himself on saxes and flute, we are 65 minutes entertained with new compositions by Derome. A music that is most close to jazz, but that is above all in between everything. With plenty of room for improvisation the music always stays in the neighborhood of the themes that Derome composed. After so many records out Derome does not surprise with something completely new, but satisfies with a very well-crafted new work by a fine ensemble. Impressive I found the solo of Derome in the last 24-minute composition Prières, were he cries his heart out. Honest music.

Impressive I found the solo of Derome in the last 24-minute composition Prières, were he cries his heart out. Honest music. 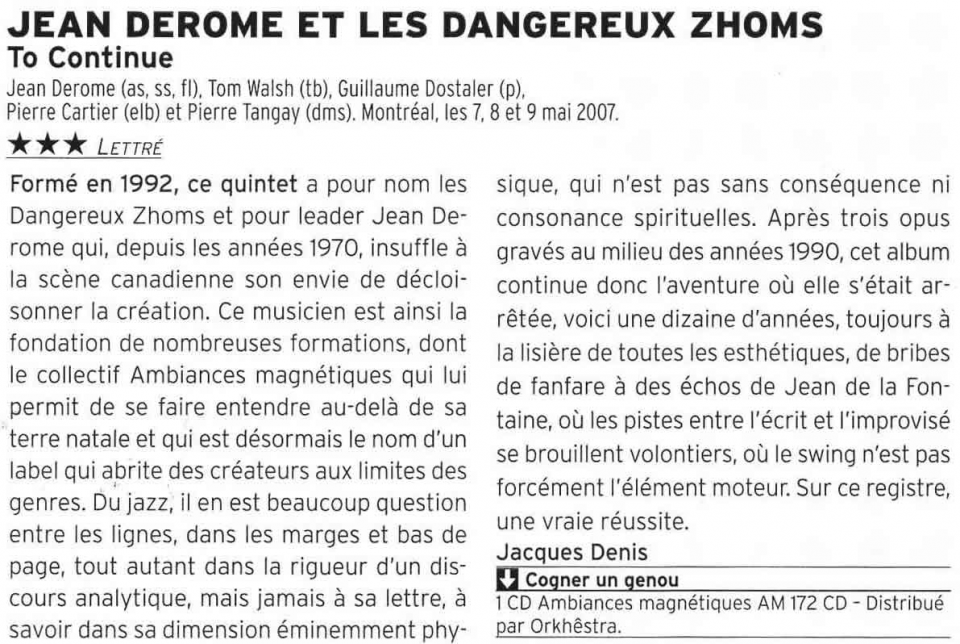 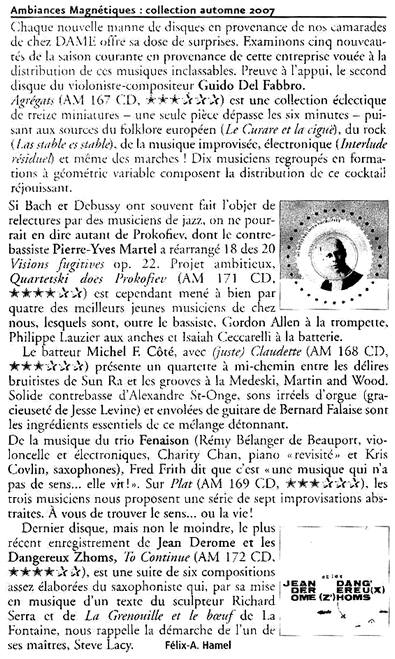 As a Canadian writing about jazz for U.S.-based publications I often get asked what thescene” is like here, and who is making interesting music (in fact, there is an entire column of reviews of new Canadian CDs by me in the current issue of DownBeat). It’s difficult to describe the scene without talking about Canada’s definingtwo solitudes,” and at that point I usually see my American friends’ eyes glazing over. But how else can you explain why Jean Derome, and in particular his quintet Les Dangereux Zhoms, are not known throughout Canada as the best band in the land? Their new CD To Continue is their first new recording in a decade, and it reminds me what a terrific group this is. Aside from Derome’s expressive writing and playing - primarily on alto here - the band has the great Tom Walsh on trombone and Pierre Tanguay, who I think is one of the most exciting drummers in the music anywhere. Perhaps the best thing about Derome’s music, though, is that it is part of the tradition, yet distinct from music that would have been made anywhere but in Quebec. It is hard to pinpoint the distinctive regional features - it is in Derome’s humour, in his fascination with language, and in a certain outsider’s perspective that shines through. If there was one recording that I’d want American listeners to hear so they might reach a better understanding of the diversity of improvised music here, this might be it.

If there was one recording that I’d want American listeners to hear so they might reach a better understanding of the diversity of improvised music here, this might be it.