Leading such an outstanding group of players in the production of an album requires much candor and courage. Guitarist Antoine Berthiaume is joined by Michel Donato and Pierre Tanguay in this dynamic trio that will that will groove your heart and soul. Ellen’s Bar unveils a different side of Antoine’s multifaceted activities. The eleven originals presented here are bursting with vitality and showcasing a firm and lively guitar style, while relying strongly on the jazz trio tradition. Except for the pieces written by Donato and Tanguay, Berthiaume has dedicated all his compositions to friends made in Montréal and New York over the last few years, while he was studying.

Impressionant!
Their jazz is stimulating, yet mild and totally pleasant. 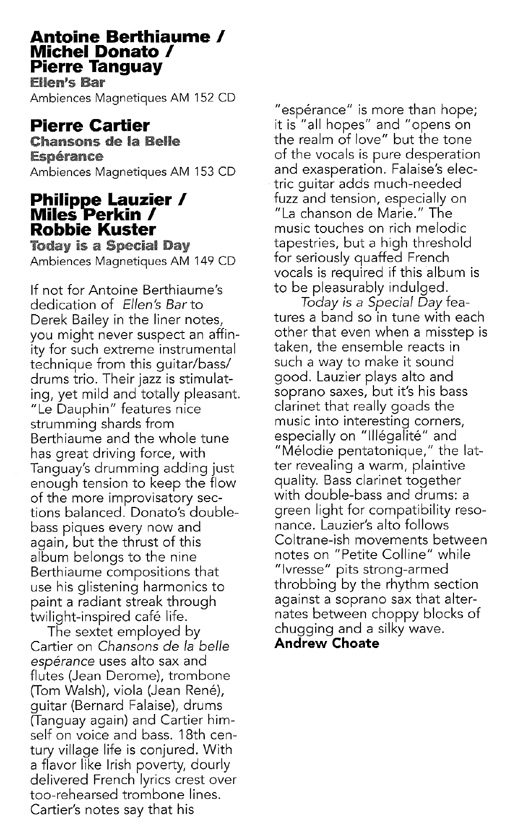 … a true jazz album. And a very nice one too.

Leading such an outstanding group of players in the production of an album requires much candor and courage. Guitarist Antoine Berthiuame is joined by Michel Donato and Pierre Tanguay in this dynamic trio that will groove your heart and soul. Ellen’s Bar unveils a different side of Antoine’s multifaceted activities. The eleven originals presented here are bursting with vitality and showcasing a firm and lively guitar style, while relying strongly on the jazz trio tradition. Except for the pieces written by Donato and Tanguay, Berthiaume has dedicated all his compositions to friends made in Montréal and New York over the last few years, while he was studying. So far, Montréal-based guitar great, Antoine Berthiuame, has been involved with three superb improvised discs, Soshin, duos with Derek Bailey & Fred Frith, Leaves and Snow, a trio with Quentin Sirjacq & Norman Teale and duo with Japanese guitarist Takumi Seino. For this new disc, Antoine unveils something completely different, his jazz guitar trio. Antoine has put together an excellent trio of veteran players, with Michel Donato on bass and the ubiquitous Pierre Tanguay on drums. The trio swings with infectious glee. Antoine wrote all but two of the tunes, with one by each other band-member. Antoine has a sunny, Pat Metheny-esque tone, yet writes pieces more difficult than Metheny often does. The trio play tightly together, as well as around one another in circular motion. This is a marvelous trio, where each member is an integral part of the whole. On Mr. Donato’s Le Dentiste, the trio swirls around one another, yet stay connected throughout. Antoine sounds like Lenny Breau here, playing with astonishing grace and that inventive spirit. Weiny is a lush, elegant bluesy ballad that is just so fine. The title track is a sly one with a rich melody that you will forget. The ever-dependable and ever-crafty drummer, Pierre Tanguay, is a marvel of inventiveness, always balancing between swinging and playing around the pulse perfectly. Ellen’s Bar, is this month’s best jazz guitar disc by one trio, whereas the Tom Chess disc mentioned last week featured six trios.

The eleven originals presented here are bursting with vitality and showcasing a firm and lively guitar style, while relying strongly on the jazz trio tradition.