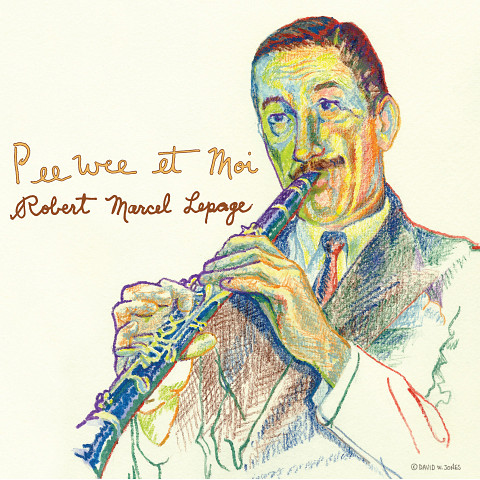 Pee Wee and Me: Lepage has created a sweet and slighly skewed homage to the legendarily idiosyncretic American clarinettist Pee Wee Russell. Each and every blues of this suite are an affectionate tribute to the great swing player. Deeply troubled clarinetist Pee Wee Russell rose to fame through the 1930’s and into the 1950’s where his musicianship was on par with leading jazz players of that time.

“Pee Wee and I are in contrary motion: he was a drinker, played the clarinet in an eccentric style in a conventional world and took up drawing towards the end of his career. I started my own by drawing. I don’t drink, and I play the clarinet in a more or less conventional manner surrounded by eccentric musicians. Pee Wee and I were destined to meet each other. Jazz, also, is a world of encounters. In Pee Wee’s day, traditional musical fanfares springing from European roots were discovering and integrating Afro-American blues. My own musical language also has references to fanfares within a blues context. The distance between the solo and its larger musical context is where Pee Wee and I come from the same family. Add the tendency to transform the clarinet’s timbre and you see where, over time, our paths cross. Each of the blues in this suite is an invitation to explore a particular aspect of Pee Wee’s phrasing. Somewhere along the way, Pee Wee said: “There are hundreds of clarinetists that play better than me, but nobody plays like me.” I’ll buy that line and use it as my own. I would even add that I never even play twice… exactly like myself… This disc is dedicated to my friend Raymond Gervais, who led me to discover Pee Wee Russell.” — Robert Marcel Lepage, Montréal, November 2005 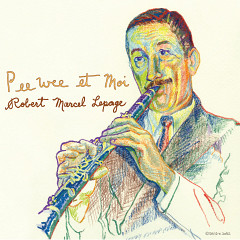