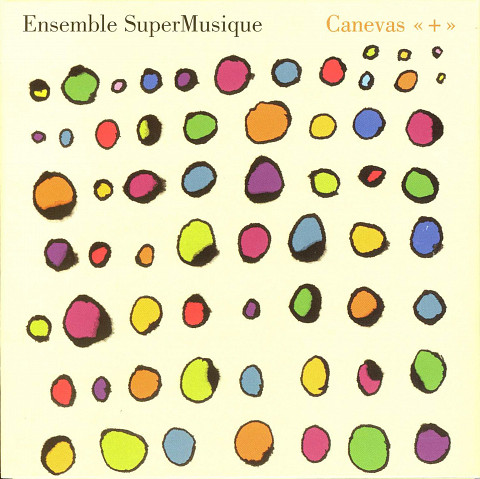 … Ambiances Magnétiques / SuperMusique crew has renewed both its roster and its approaches, while remaining true to its multi-faceted identity. Recommended. — AllMusic, USA

Improvised music, composed music, an improvisation framework: a sound patchwork. A collage made from 14 excerpts taken from five different concerts by Ensemble SuperMusique presented between 1998 and 2004.

A shape-shifting ensemble solely devoted to the performance of new music works and improvisation, L’Ensemble SuperMusique is comprised of musicians who have developed, over the last two decades, a very deep and significant understanding of the vocabulary of new music. They are masters of the genre. The Canevas «+» musicians’ original compositions and live spur-of-the-moment performances highlight the Ensemble’s flexibility and audacity.

This item can be downloaded and/or listened to at ensemblesupermusique.bandcamp.com. 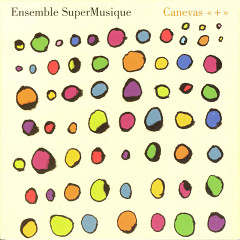 Here’s the family tree Ambiances Magnétiques is an avant-garde musicians’ collective-cum-record label. Productions SuperMusique is a production company set up by Joane Hétu, Diane Labrosse and Danielle Palardy Roger, all members of Ambiances Magnétiques. The Ensemble SuperMusique is a shapeshifting supergroup bringing together Montréal-based improvisers closely or loosely associated with Ambiances Magnétiques and/or the Montréal improv scene. And Canevas «+» is the group’s first CD, culling various excerpts from concerts recorded between 1998 and 2004. Despite its collective nature, the AM crew has rarely released live collective material, the only previous occurrence being the 1992 CD Une Théorie des Ensembles (which, except for two group pieces, presentedseparate projects from group members). Canevas «+» is much more gregarious. We are presented with a true free improv ensemble (not unlike the London Improvisers Orchestra, although on a smaller scale), performing structured improvisations, conductions, and a few loose compositions. But the ensemble shapeshifts from track to track, from year to year. The core remains relatively the same: Hétu, Labrosse and Roger, plus Jean Derome and Martin Tétreault. Around them revolve familiar Ambiances Magnétiques names, such as Pierre Tanguay and Pierre Cartier, but also relatively newcomers like Sam Shalabi, Nicolas Caloia, Gabrielle Bouthillier and Morceaux de machines’ Aimé Dontigny. No matter what shape the group takes, the result is sharp, deep-running, consensual improvising. And thanks to Joane Hétu’senlightened editing, the tracklist unfolds seamlessly, with much more cohesion than expected. Highlights include the three composed revisitations of folk songs by La Bolduc (aka Mary Travers, a Quebec cultural icon of the Great Depression era), Hétu’s improv game Le Discours, Labrosse’s two pieces (La Tulipe and Les Mouches, somewhere between her projects Parasites and (Petit Traité de Sagesse Pratique), and Tétreault’s contributions, all very playful and quote-heavy. Canevas «+» requires some getting used to, if only because of the number of people involved and the shortness of the tracks (it’s hard to keep up!), but its rewards are aplenty and the album gives proof that the Ambiances Magnétiques/SuperMusique crew has renewed both its roster and its approaches, while remaining true to its multi-faceted identity. Recommended.

… Ambiances Magnétiques / SuperMusique crew has renewed both its roster and its approaches, while remaining true to its multi-faceted identity. Recommended. 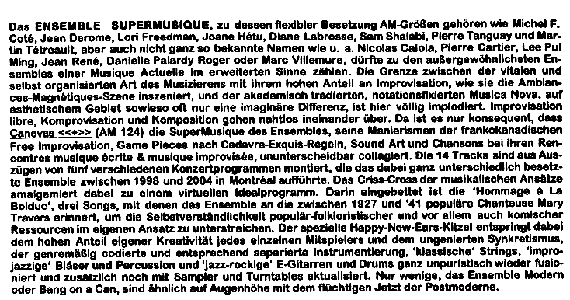 Excerpts from five separate events that occurred in Montréal between April 1998 and February 2004, colour-coded on the sleeve, jumbled and programmed out of chronological sequence to form a lively profile of the city’s exploratory music scene.

There are familiar names - saxophonist Jean Derome, singer and saxophonist Joane Hétu, turntablist Martin Tétreault, guitarist Sam Shalabi - mingling with younger and less well known players in varied combinations. There are composed pieces - by Allison Cameron, Danielle Palardy Roger and Marie Pelletier - scored, conceptually structured, conducted and free improvistions. There’s formality, theatricality, song, noise and intricacy. The recurrence and overlap of players results in a unified feel nonetheless; there’s a coherence in the chemistry even as the centres of interest continually shift, and that makes for a document that repays repeated investigation. 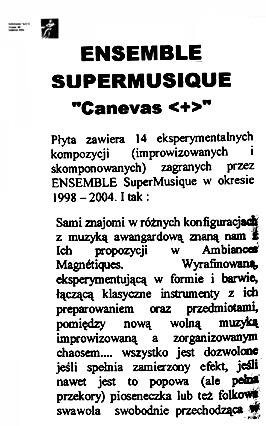 Ensemble SuperMusique’s Canevas «+» could be described as a free improvisation sampler with some composed works thrown in for good measure. Featuring excerpts from four multi-thematic Montréal concerts which took place from 1998-2004, this is a great CD for both new and frequent listeners of these genres. The group employs some of the best improvisers around with numerous personnel configurations on the improvisational tracks resulting in illuminating creations. Great improvisational ideas abound here! Of note is the feisty Impro2 by Jean Derome[, Diane Labrosse] and Martin Tétreault - everything I’ve ever hoped for in an improv can be found on this 1:59 minute track. If you are going to listen to just one CD this summer, let it be this one! Great!

If you are going to listen to just one CD this summer, let it be this one! Great!