Driven by energy and a certain innocence, Mélanie Auclair meets inspired and inspiring musicians: Guy Thouin, Bernard Falaise, Charles Papasoff and Joane Hétu, among others. A collection of immediate meetings ruled by freely emotive and textural music in an atmosphere of understanding and flexibility. A surprising debut album!

“Puce à l’oreille is born out of an urge to create, to meet, to learn. After a number of creative experiences for theatre and dance, I wanted to push my experiments further by placing myself in the service of music, instead of placing the music in the service of another medium. I wanted to throw myself into it, to expose myself, to make the music that would present itself to me, while seizing the moment – a way of interpreting the instant. I wanted to be surrounded by people who have been inspiring me for a long time, people I admire for their approach, their playing, their strength in making their music uncompromisingly. I wanted to play with these people, to share a moment with them. These people I invited have all been extremely generous. This album has been conceived without any expectations, without even the thought that these experiments could lead to an album, my sole desire being to spend time with these people, to get to know them through the music and to get to know music through them. I was also very interested in the idea of playing music with people I didn’t know, our first human contact being established through music. The studio session unfolded just like that, with its load of feelings and surprises – like life itself. And that’s how, for a moment, I came into musical contact with these people. Each one of them gave me a bug… And I’ll do the same to you…” –Mélanie Auclair

Mélanie Auclair sings and plays cello. Instrumentally, she is straightforward and unsentimental; vocally, she is free from melodrama, sounding quietly excited and a touch vulnerable. One solo, six duets and a trio with other Canadian musicians are offered as a suite of instants and prove to be a most agreeable flea in the ear.

She engages with piano, colourful mixed percussion, double bass, baritone sax, Joane Hétu’s vocalising, Bernard Falaise’s splendidly compliant electric guitar and a combination of vibes and shakuhachi flute. Auclair’s lightness of touch coupled with her unassuming directness make for more intimate and satisfying music than is usual in such episodic projects. Puce à l’oreille has the appeal of meetings that just scratch the surface of common ground, the attractiveness of the still finding out stage. 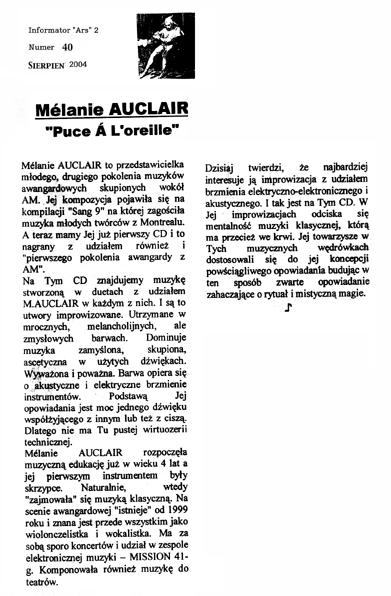 Albums like Puce à l’oreille divide the audience into three groups: those who get it, those who don’t get it and think it’s ludicrous, and those who don’t get it but are willing to believe that someone out there probably does. I like to think I’m in camp three, though there are times when I start to look toward the second camp and suspect that they may have a point. Then I realize that I’ve learned more about myself and my own tastes while listening to Puce à l’oreille than I did about the album itself.

The disc is the product of an afterthought: Mélanie Auclair, a singer and cellist, wanted to explore music with several artists who had influenced her over the years. What began as an informal jam session evolved into the tracks we hear on the album. However, this is no Phish concert; this is minimalist, modal jazz, world music, ambient acoustics and verbal noises that don’t pass for lyrics in the Western world. As such, I’m reluctant to dismiss the album out of hand because it’s clearly not targeted at my own personal demographic — and especially as I enjoyed a good deal of it. Auclair is a wonderful cellist with an incredible experimental streak and the musicians she has surrounded herself with are all highly skilled, if unconventional. The raw string duets between Mélanie and Eric Auclair on Puce à l’oreille 4, and her pairing with saxophonist Charles Papasoff on Puce à l’oreille 5, engage me because these are instruments I can relate to, albeit played in nouvelle (to me) ways. But as the album veers into the occasional vocals, which are really a barrage of guttural noises somewhere between sex and death, and which at one point resemble vomiting parakeets, I’ll admit that I can’t help but glance back at camp two and wonder if they’re the ones who are missing something, or if I am.

Auclair is a wonderful cellist with an incredible experimental streak…

Mélanie Auclair’s Puce à l’oreille is an experimental exploration of first-time improvisational interactions between this cellist/vocalist and seven improvisers who have been inspirational for her. In stark contrast to the [Trio Derome Guilbeault Tanguay] 10 compositions release, this “Hi, who are you?” musical approach may lead to a more fulfilling musical experience for the performers than for the listener. The tracks here are successful mainly for the ingenuity of the performers. Auclair especially shows great promise and a mature musical sensibility. Worth checking out.

On the compilation CD Sang 9 reviewed for Vital several months ago, the Ambiances Magnétiques label presented new and lesser known talents from Canada on the new music scene. One of them was Mélanie Auclair who now presents her first solo effort. On most of the pieces on this debut she either sings or plays cello. Most pieces have accompanied with another musician. On one piece we hear a trio and in the opening track Auclair plays a solopiece for cello. Auclair started playing cello at the age of 4 and later she was trained in classical singing. Nowadays Auclair likes to play improvised music because of her interest and drive to let emerge music spontaneously. She recorded with Joane Hétu, Bernard Falaise and Klaxon Gueule a.o. Auclair also has some experience in composing for theatre and dance productions. But now she wanted her music to stand on it’s own feet. For this project she asked and received the cooperation of several musicians she admires. We hear Auclair in duo with Vincent Réhel (piano), Guy Thouin (percussion, voice), Eric Auclair (bass, vibraphone), Charles Papasoff (bariton sax), Joane Hétu (voice) and Bernard Falaise (electric guitar). The cd closes with a trio by Eric Auclair and Michel Dubeau (Shakuachi). So it should not surprise that the 8 tracks on this cd make up a varied collection of improvisations. In all these meetings Auclair was interested in letting the improvisations come as spontaneoulsy as possible. If you ask me what they have in common, I would say that most pieces develop in the same slow pace. The intense vocal piece by Auclair and Hétu forms the exception. Because Auclair likes to play the low ranges of the cello most pieces have a dark and melancholic atmosphere, which is escpecially the case for the moving opening track. A common quality is also that most improvisations are textural explorations. Another musician mysterously named Papa Sucreah plays a role here. He seems to involved in most of the tracks doing some electronic extras that I’m unable to identify. Anyway with Puce à l’oreille Auclair delivers a improvised music that is ‘unspectacular’ but of a great emotive quality and honesty.

Auclair delivers a improvised music that is ‘unspectacular’ but of a great emotive quality and honesty.

Puce à l’oreille is Mélanie Auclair’s debut album, released soon after her appearance on the compilation CD Sang 9, a survey of the new generation of Quebec avant-garde artists curated by DAME, Ambiances Magnétiques umbrella company. This new addition to the label’s roster is not all that impressive. Consisting of one solo piece, six duets and one final trio, the album constantly showcases the limitations of the young cellist and vocalist, by pitting her against much more experienced improvisers. The opening track tracks are designated by drawings instead of bearing titles) is basically a drone, elegant and intimate, but lacking in character. The duet with keyboardist Vincent Réhel is interesting, Auclair again sticking to droning textures. Her meetings with tabla player Guy Thouin, saxophonist Charles Papasoff, guitarist Bernard Falaise of Miriodor and Klaxon Gueule and vocalist Joane Hétu feature a wide variety of approaches. Auclair is clearly dominated by the ferocious baritone sax of Papasoff and by Falaise’s ever-fascinating guitar textures, although the piece with the latter is the disc’s highlight, thanks to some highly lyrical passages on the cello and a surprising use of electronic treatments. At the other end of the spectrum, the duet with doublebassist Éric Auclair is weak, failing to go anywhere as it runs from one incomplete idea to another. Measuring yourself up to established musicians on your debut album is certainly a daring move, but in this particular case it works against, not for Auclair.