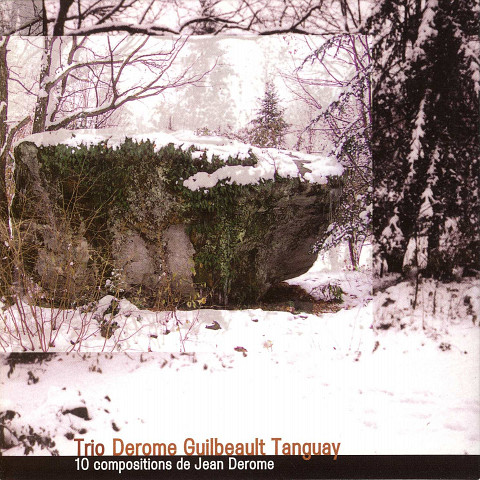 A cult Montréal jazz band, Trio Derome Guilbeault Tanguay is loved for its irresistible swing, audacity, sophisticated group playing, highly original repertoire and authentic style. All these elements are the result of a vast comprehension of the history of jazz, not to mention a vigorous proposition as to its reinvention. With this first album, the Trio delivers ten new compositions by Jean Derome.

Each note of the bass line in Marcher sur des braises (Stepping on Hot Coals) has been written slightly before the beat, as if one wanted to touch the stove element (or to step on hot coals!) and was afraid to get burned. The structure of the piece is rather standard (it evokes Impressions or So What), but the shifts between 8-bar and 6-bar sections give it a distinctive drive.

As indicated by its title, Vérone (Verona) was written in Verona, Italy, while on tour with Fred Frith and Keep the Dog in the early ‘90s. The piece is built over a D pedal but presents different modal colors, particularly in the B section where the harmony explores modes in a tense relationship with the fundamental. Each musician is constantly presented with the option to play the ostinato or to play a slow or double-time walking line. The A section is in 4/4, but there is a 3/4 bar hidden in there somewhere in order to destabilize the jazzmen’s tendency to play on auto-pilot. The B section is in 7/4.

L’Africaine (The African) adopts a meditative mood established by an ostinato bass riff switching between 6- and 7-beat bars. The head consists of only a few notes followed by an ever-changing modal improvisation inspired by the flexibility and rhythmical creativity of African singers. As for Pierre Tanguay’s percussion work: he is playing on the wood logs used to heat the cottage where we were recording the album.

Pangolin is an old composition. It has rarely been performed live, but I often play it on the piano. The head appears three times, but the accompaniment for the third occurrence shifts from 12/8 to 4/8 time, giving the impression that the floor has just vanished under your feet. The pangolin is a large, massive, slow and short-legged mammal resembling an anteater or wolverine with scales.

Étymologie (Etymology) goes back to the early ‘80s. It was written as a tribute to Ornette Coleman. The piece is only 7 bars long and is highly difficult in terms of rhythm and harmony, mostly because of the rhythmic shifts of the chord chart. The head is reminiscent of the speech-singing style of some of Ornette’s heads, but it also refers to Monk. Étymologie was embedded in the piece Les Aventures de Sacha le chat, released on the LP Le retour des Granules.

La baignade (The Swim) was written for Jeannine Gagné’s film Au fil de l’eau. The piece is built over a bass ostinato switching rather unpredictably between bars in 5/4 and 6/4. The head introduces more rhythmic rifts, including some 5/8 figures dancing and hovering over the bass line.

Que’kun! (Som’one!) is the word my daughter Raphaëlle used to utter as a baby whenever she heard someone at the door. I also remember she used to say “noune" for mouche (fly) and “wawane" for fromage (cheese). The 3/4 piece is in AAB form, but the B is only subtly different from the A. Que’kun! evokes an unknown and unexpected visitor knocking at the door; he represents both a threat and a chance for change.

Fluide (Fluid) is a piece without any fixed bars, written à la a Gregorian theme. Saxophone and bass play the head to the octave, and then the several scale options opened by the head are investigated and freely developed through improvisation.

Cannelle (Cinnamon) is probably the oldest piece appearing on this album; I must have written it in the mid-‘70s. I often performed it on flute (I only played the flute back then) with the bassist Claude Simard, who played in Nébu, the group started by the pianist Pierre St-Jacques. Cannelle’s head reminds me of the music of Dave Holland and I dedicate it to him. The apparent simplicity and the jovial, almost “Country & Western” mood of the piece hide in fact some fearsome rhythmic and harmonic complications.

Michka was premiered by the trio for the music of the film La position de l’escargot by Michka Saäl. The music of this film has been composed by the Derome Guilbeault Tanguay trio, almost entirely by freely improvising to the images (the same method Miles Davis used for Louis Malle’s film Ascenseur pour l’échafaud), except for Michka, which had been previously recorded to be used as background music in a scene where the main character is listening to a jazz record. —Jean Derome, February 04

This item can be downloaded and/or listened to at trioderomeguibeaulttanguay.bandcamp.com. 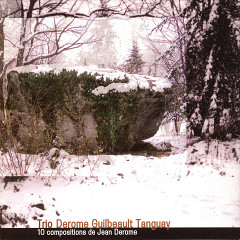