Diversion is the second album from Noma, an ensemble formed and directed by trombonist Tom Walsh. It was recorded live at La Sala Rossa in December 2002 and at the Music Gallery in Toronto in 2000.

Taken from the best moments of performances in Toronto and Montréal between 2000 and 2002, Diversion provides an opportunity to discover the virtuosity of Noma and its composer and leader Tom Walsh. 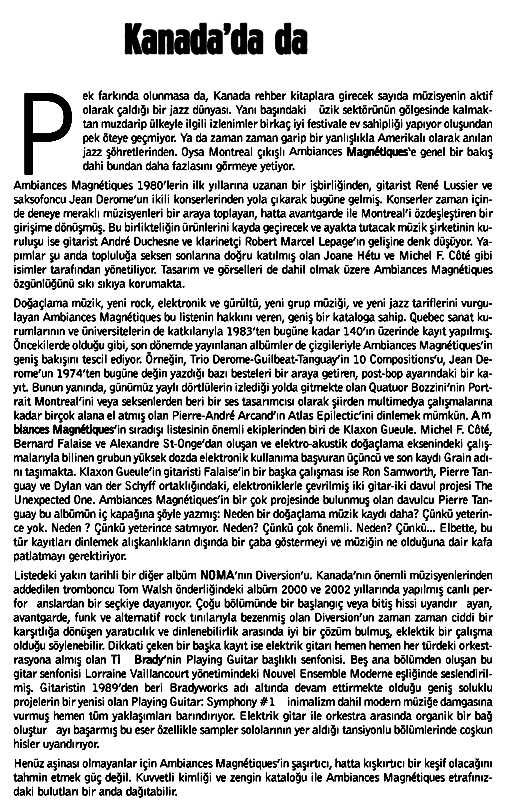 A musical eclectic, trombonist Tom Walsh has become a fixture of Montréal’s actuelle scene since his move from Toronto in 1990. Around that same time, he put together a middle-size group, NOMA, with musicians from both cities. As a kind of free-form funk band that had definite Prime Time connections, it could groove with the best of them, but the difficulties of holding such a group together led to its eventual disbanding. A decade later, a slimmed down version was re-introduced, this time with an all-Montréal lineup of seven, divided into a funk rhythm section (with electric bass, guitar and drums) and a jazz one (with acoustic bass, guitar and drums), with the leader directing traffic, knob-turning his sampler and turning in a few trombone spots (in that order). Thirteen years after its debut release, Climbing the Waltz, this long delayed follow-up appears, but time seems not to have altered much of its basic portent. Indeed, the groove element is very much at the heart of the music, but the pieces (11 in total) are much more fragmented, or modular, implying they’re never assembled the same way from one performance to the next. Like the first disc reviewed above, this one is also a composerdriven project, albeit looser, with spot solos, mainly by electric bassist Al Baculis, but not that many from the leader himself. The jazz connection is more covert than overt, apart from Bud’s Dub, the rollicking theme of which is actually Monk’sln Walked Bud” (uncredited). An unusual feature is that all but two pieces have been further subdivided, resulting in 32 tracks (a deliberate choice of the leader to allow listeners to surf through the music according to their own whims).