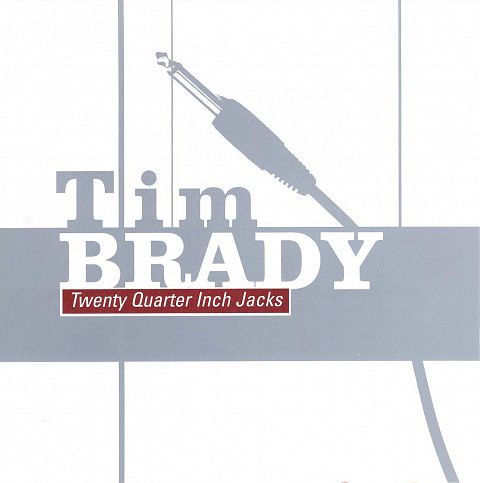 Twenty Quartet Inch Jacks is Tim Brady’s first release on the Ambiance Magnétiques label and with this record Brady moves his work as both a composer and a guitarist into new territory. Well-known for his innovative guitar work, this new CD combines a major new work for 20 guitars with 2 works which make extensive use of sampling and computer sound design.

The title track is a work commissioned by the international theatre festival Les Coups de Théâtre. The commission was for a live performance work for 20 young guitarists lasting 45 minutes, but soon after Brady began composing the work it became clear that the recorded version of the work was taking on a life of its own. Using no electronics or sampling, and limiting himself to one guitar (a Steinberger GM4T), one fuzz box, a volume pedal and a slide, Brady set out to create a work that explored of the fundamental character of the guitar while creating a new sense of what a guitar ensemble could sound like. Simple picking, big chords, noisey strings, bluesy string bends, open string pull-offs and percussive attacks are the elements that combine to create striking musical textures and evocative atmospheres. The work divides into 8 sections, but is meant to be played and listened to as a single, continuos piece. The human voice (Brady’s on the CD) is also an integral part of the sound world, as the theatrical nature of the work bridges the gap between pure music and live performance.

The human voice play an important role in the 2 other pieces on the CD. Music Box Bell Curves (“Hello Paris!”) was commissioned by Ina-GRM for the 2001 Radio-France festival Présence in Paris. Using dozens of samples of small toy instruments, which he has collected for 40 years, and samples from a “sonic party” (where these instrumenta are played by his friends), Brady created a dramatic tape part that frames a heavily processed live guitar part.

The last work on the CD grew out of a commission by the Centre for Contemporary Arts (CCA) in Glasgow (Scotland). In 2001, Brady created an installation piece entitled “public space/private music,” using samples of Sauchiehall Street and sounds from the CCA building. After the installation the sound of these samples stuck in his mind and he eventually re-worked the samples into a larger piece for guitar and tape. The simple guitar part creates a sense of dialogue with the textures of the tape, moving to a rhythmic climax and resolving to the quiet sounds of a workman whistling a hint of a tune as he sweeps the floor at the CCA. The guitar returns, playing quiet harmonics as the sounds of the streets of Glasgow bring the work to a close. 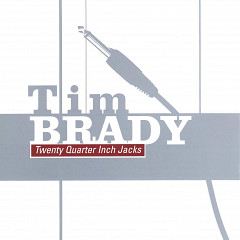 Canadian composer/guitarist Tim Brady crosses the genres of electroacoustic composition, dance scores and improv. Based in Montréal, he’s drawn more to New York downtown than French musique concrète tradition, though Music Box Bell Curves on Twenty Quarter Inch Jacks was commissioned by Ina-GRM. That piece and Sauchiehall Street on the same disc use the now traditional if inflexible technology of live performer plus tape. The title track originated as instrumental music theatre for 20 young guitarists, but this is a multitrack studio recording by the composer. Sadly, Brady’s brand of domesticated Jimi Hendrix offers technical mastery without too many fresh ideas. Though there’s a raw energy to the saxophone quartet title track of Unison Rituals, performed by Quasar, this disc of compositions mostly for his ensemble Bradyworks is no more inspiring, and you wonder whether the composer really deserves his academic support network.

On one movement of his suite Twenty Quarter-Inch Jacks, Tim Brady name-cecks an almost-complete alphabet of influences that ranges from obvious choices like Bill Frisell and Jimi Hendrix to unusaal pickers like Mike Nesmith. That list tells you everything you need to know about bath Brady’s love of guitar and his eclecticism. Those twin loves characterize his music, which is full of sweeping waves of sound, jump-cut juxtapositions and sudden transitions to exquisite guitarplaying.

The title suite is a guitarist’s fantasy— composed for 20 players, but performed here solely by Brady. Over its half-hour length he explores the sonic possibilities of 120 vibrating strings and no small amount of feedback. Ranging from the ringing waves of Harmonic Fields to the fuzzed-out crunch of the aptly named Metal the piece is richly textured and intriguing, like a huge maze of sound caves. Music Box Bell Curves (Hello Paris!) has all the earmarks of a Brady composition, but the disparate tonal episodes and bursts of noisy dissonance don’t hang together as well as they might. A second piece for solo guitar and tape — an eight-minute excerpt from his composition Public space/private music — is more succesfull as a sonic streetscape.