Luckily, the musicianship saves this album from its most awkward moments, creating a fine snapshot indeed. — Splendid E-Zine, USA

In constant danger a slender wire, a free concerto crafted with passion, a complete and unabridged series of snapshots, devoid of artifice, on the iron wire.

Late last year, the thriving Québécois alternative indie label Ambiances Magnétiques put out no less than seven new tides. In the decade since the creation of its parent distribution company DAME, this label has tripled its catalogue, from the modest 24 issued in its first nine years on the market to an even 100 as of the New Year. Generally knawn under the heading of musique actuelle, this label’s aesthetic is as much rooted in the prog rock field of the ’70s and ’80s as it is in a range of eclectic improvisational practices.

From its latest crop, these two discs showcase some of the label’s familiar faces. The first, Polaroïde, is infused by a chamber-music aesthetic. One need not go further than its instrumentation of acoustic guiar, viola and drums/percussion to get the hint. The very disparate backgrounds of the players is worth noting. The leader, guitarist André Duchesne, is a 30-year veteran of dhe Québécois art-rock scene who seems to have tumed into a “switched off" improviser since breaking a lengthy perfomming and recording hiatus in the past couple of years. In contrast, violist Jean Rene is thoroughly trained in classical music and has extensive expe rience as an orchestral player. Drummer Pierre Tanguay is a musique actuelle regular.

In spite of this unlikely combination, a meeting of minds does occur over the disc’s 12 tracks. With four tracks bearing the CD title, one could be tempted to all: about improvisational snapshots, each one allowing finely demiled sonic pictures to develop gradually before one’s ears. Though there are no composer credits, either individual or collective, there are many moments which manage to attain dhe clarity of a well-conceived score. The obliquely written notes (uncredited) do refer to Stravinsky, and a nod to Bartok would also have been welcome.

For thirty years, classical guitarist André Duchesne has been playing Left Bank (Left Bank? How gauche!) cabaret jazz. Smoke-filled improvisation rules most of this album, with song structure either out of the picture, or too complex to be appreciated fully. There is no doubt as to Duchesne’s ability: he paints himself into a corner many times, only to gracefully slip away. This is not to say that all lovers of the nylon strings will enjoy Poloroide; it is quite demanding, and does not lend itself to casual ears. Duchesne asks his listeners to tolerate all of the aimless, uninspired parts in order to hear the more sublimely melodic in a new light.

Typical of Duchesne’s sound is Polaroide II, which opens with an amiable guitar solo reminiscent of Debussy’s The Girl with the Flaxen Hair. Suddenly, the melody gives way to an atonal mode. As Duchesne’s guitar tone darkens, it is also marked by a wash of cymbals and a mournful violin, completing the threnody. Not exactly Django Reinhardt, but I’m sure that Duchesne would welcome the contrast. His music is purposefully difficult and hard to follow (imagine start-stop experimental jazz improvised by a guitar novice), but his readings retain a healthy measure of poetry. Luckily, the musicianship saves this album from its most awkward moments, creating a fine snapshot indeed.

Luckily, the musicianship saves this album from its most awkward moments, creating a fine snapshot indeed.

Two new cds from two reputated canadian musicians. Both are successfull in adding new aspects to their already considerable volume of work. André Duchesne surprises with a trio with Pierre Tanguay on drums and Jean René on alto violin. Duchesne plays classical guitar as he did on his solo effort Réflexions releasesed in 1999. Like Duchesne (Conventum, Les 4 gutiaristes de l’Apocalypso Bar, Locomotive) Pierre Tanguay is known from many other Ambiances Magnétiques releases. In 2000 Tanguay delivered his first and very tasteful La Musique de mon Disque. For Jean René it is his first appearance on this label. He studied composition and conducting and became solo violist for the Orchestre Métropolitain in 1991. He is active in a number of chamber music groups and is interested in the new music, both written and improvised. So this trio must be an interesting context for him, as the music is all about modern chamber music and improvisation. In the older work of Duchesne rock was never far away. In this new work on the other hand he moves away from music that is in one way or the other related to rock. With Polaroïde we enter into the world of modern chamber music. Concentrated and complex music. Igor Stravinsky is somewhere in the neighboorhood. René is very prominent on this cd. He is a very sensible violist and it is a joy to listen to him.

Jean Derome tells us that he “always has been fascinated by catalogues, lists and dictionaries. They are our somewhat naive attempts to conquer the diversity and complexity of the world around us.” How shall I order my collection of stamps? Land by land, birds by birds, etc.? This are superficial but maybe relevant criteria to bring order into a diversity. From this fascination originated his new cd Le magasin de tissu (The Fabric Shop). He recorded 69 short improvised pieces. Each piece has one instrument. He uses reeds, flutes and all kinds of percussive instruments and objects. It is a catalogue - not exhaustive - of the instruments and sounds Derome makes use of in his music. All pieces last about 69 seconds. In between the pieces they are 13 seconds of silence. After compiling this catalogue of 69 soundpieces he put them in some order in the following way. The pieces were distributed on three different cds. So each one has 23 tracks. Derome played these three cds simultaneously in shuffle mode and re-recorded the result. That is what we have in our hands. So it is one of many possible worlds. Is it the best of all possible worlds…? Composed as it is in a very extrinsic way. A naive attempt to compose music…? “This project was designed to allow chance to show its beauty” Derome concludes…

… successfull in adding new aspects to their already considerable volume of work. 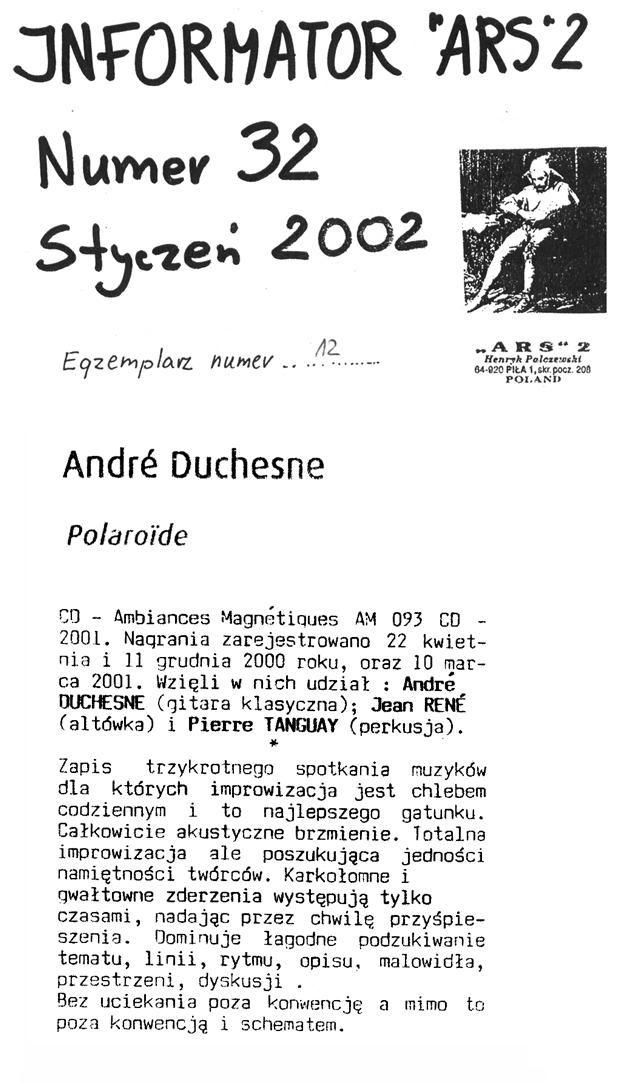