… the type of CD that could easily serve as a dadaist resource guide to playing the twentieth century’s most important invention, one that legions of string fanatics ought to be listening to… — Signal to Noise, USA

First recording by the Nova Scotia guitar duet which compiles a series free improvisations presented as is, without editing.

Daniel Heïkalo is a Montréal-born musician, composer, improvisor and sound designer. As a versatile and flexible artist, he is perfectly suited for theatre, film, dance, and radio productions.

Arthur Bull is a veteran musician of the improvising music scene. Formerly the guitarist with The Four Horsemen, Bull has also played extensively with Paul Dutton, David Prentice, Michael Snow, John Oswald, Bill Smith and Paul Cram, and he has performed in concert with Derek Bailey and Roscoe Mitchell.

The result of this union is terrific. 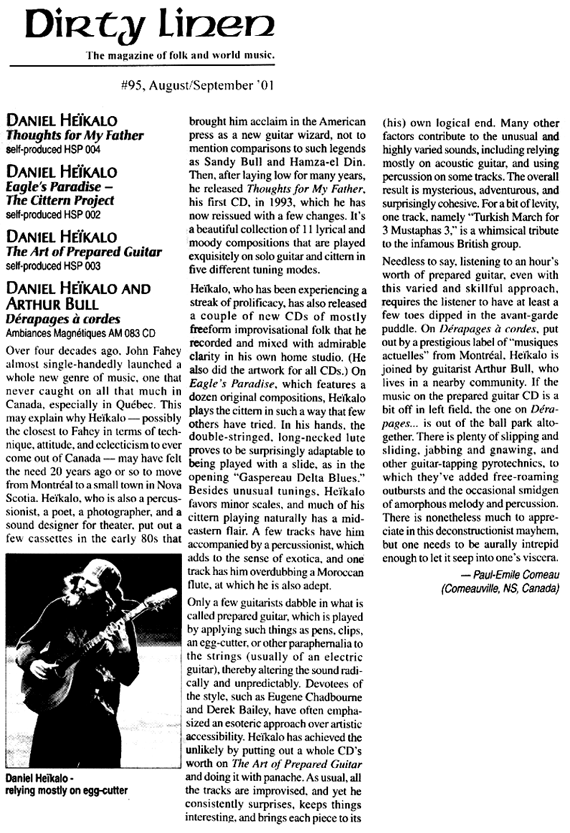 The Halifax-based duo of Arthur Bull and Daniel Heïkalo appear as smitten with the sonic possibilities of the guitar as Brady, athought they work exclusively at low volume, creating dialogues of rattling strings, percussive scrapes and slithery e-bow slides. Their open-ended improvisations require close listening to reveal the full spectrum of sound.

At their most effective, on the eight-minute tiltle track, the tow can create intense mosaics that ressemble an Indian raga in both intensity and form, or-on Trente-deux légions de bilboquets visigoths- generate the tonality and flow of a gamelan group.

But those types of long-form workouts are the exception. More frequenly Bull and Heïkalo indulge in brief scurrying exchanges such as the flurry of electric and acoustic notes that fly on Whatever That Chord Was… (It Had To Be The Final Chord). It’s worth nothing that this closing song marks the only time that Heïkalo employs and unadulterated acoustic tone.

I wish I had four or five copies of this release to send to my guitarist friends around the country. It is the type of CD that could easily serve as a dadaist resource guide to playing the twentieth century’s most important invention, one that legions of string fanatics ought to be listening to instead of the new (insert name of current guitar god here). Bull and Heikalo mine a free improvising territory that recalLs the venerabLe Derek Bailey and the good Doctor Chadbourne though this duo’s approach is certainLy colored by interests in the music of the far east. This could be the blues as seen from the Sudan, Guatamala, or Beijing, a music that has escaped the harmonic straibacket of north american culture though its influences (blues, noise, breton music, flamenco, ritual music) has soaked through the artful percussive dialogues present here. Heikalo and Bull live on the far east side of Canada in Nova Scotia, an area that is removed enough from big city living that the two can conjure a unique sound, one that builds on their combined histories (for Heikalo, years of radio and electroacoustic work: for Bull, half a lifetime spent touring and pLaying with master improvisers of music, language and theatre). If you’re ever bored with what a guitar can do in the conventional sense, consider the alternatives these two have found.

… the type of CD that could easily serve as a dadaist resource guide to playing the twentieth century’s most important invention, one that legions of string fanatics ought to be listening to…

Two musicians living in Nova Scotia collaborate and release their first CD together on Dérapages à cordes. Both Arthur Bull and Daniel Heïkalo are accomplished improvisers and guitarists, and they have each worked in diverse musical environments. This disc is a recording of a free improvisation, without any editing or overdubs, in eight movements/tracks. Bull takes on the semi-acoustic, slide, ebow and prepared guitars, while Heïkalo handles acoustic, classical and prepared guitars as well as cittern, percussion and bizarre vocalisations (gibberish chanting) in one of the tracks. Their collaboration is a strange blend of styles, moods, and suggestions. Hints of classical motifs blend with blues-grass suggestions and the more dominant abstract textures both harsh and subtle. The pieces are teeming with activity and creative energy, a stream of energy which it seems could never be spent, and it’s a relative joy listening to these inspired performances. A number of surprising moments and a wealth of details keep me on my toes throughout playback; bursts of percussion, scrapings, and harsh strikes on the guitars are effectively juxtaposed with approximations of melody and traditional playing. There’s never a dull moment here, though I’ll admit that on occasion it may be difficult to discern any method to the madness. This will definitely appeal to fans of the more esoteric and challenging releases on the Ambiances Magnétiques label.

The cittern and prepared guitar recordings he made himself in his Horton Landing recording studio. The collaboration with Valleybased colleague Arthur Bull, which also includes much play on prepared guitars, is on the Ambiances magnétiques Label, which consistently produces the best, most interesting, and artistically astonishing recordings in Canada and Québec’s “musiques actuelles" scene.

But here comes the cautionary disclaimer. If you are not a completely open-minded listener with fresh ears, if you are one of those who knows damn well what you like and refuses to listen to anything else, give these recordings a pass. But for anyone interested in the art of music, and in the labyrinthine ways down which that music is found, these charming and artistically brilliant performances will produce a shock of recognition: Heikalo’s music is liberated, original and unique.

He borrows heavily from all kinds of world traditions, but mixes them up in spontaneous yet disciplined outbursts of musical imagery full of often startling melody, harmony, rhythm and unpredictable sounds. On his Web site (www.trotbo.com) which he shares with his artist partner Tarnara Thiebaux, he describes his music as “freeform folk improvisational — blues, bluegrass, Appalachian, Celtic, Turkish’ Greek, Arabic and Klezmer."

Eagle’s Paradise, subtitled The Cittern Project, is entirely dedicated to the four-course, doublestringed, lute-like cittern that, when amplified and played with a “bottle-neck" slide, as it is on Gaspereau Delta Blues, sounds like a cross between an Indian sitar and a dobro. The recording is pristine in its clarity, and Heikalo’s virtuosity is transparently admirable. He is drawn to minor scales and much influenced by mid-Eastern and Indian modalities. His melodies are haunting and exotic and atmospherically suggestive.

Each track is a single take; since Heikalo is an improviser, his compositions are different each time he plays them. Musically he ranges from the melancholy dance of Goodnight Desdemona (with Ken Shorley on percussion) to the rich and dramatic soundscape of Dans les ruelles d’un navet décoloré (In the Backlanes of a Discoloured Turnip). The Art of the Prepared Guitar is a fascinating exploration of how paper clips, alligator clips, a Parker pen, and even an eggslicer can alter the sound of both electric and acoustic guitars in a way that inspires a creative mind such as Heikalo’s to make gn unearthly and quite beautiful music.

Some of his experiments include a minimum of electronic signal processing, but it never draws attention to itself in the world of slides, and resonances, and tambourinesque jingles and jangles produced by the way he handles the various gadgets attached to the guitar strings. His duo recording with Arthur Bull includes both musicians playing prepared guitars, Bull adding an ebow (electronic bow) and slides, Heikalo contributing cittern, percussion and voice.

This ls the wildest music of all as the two musicians produce a musical weather as formless as clouds buffeted and torn by errant winds, and mirroring light. The “dérapages" of the title (Dérapages à cordes) refers to an anchor slipping, and there is a-lot of that as the musicians egg each other on. Again, the minor scale and the world music exotica of the middle East dominates, but there is so much deconstruction going on in these improvisations, it would be more accurate just to call it all coloured sound. A word about Heikalo surrealist titles. He writes that kind of poetry. Eg: L’intergiboulaison des mages infundibuliformes (interacting squalls of funnel-shaped wizards—I think, with Le Petit Robert Dictionnaire at hand), or En attendant la vendeuse de toupies chantantes (Waiting upon the seller of singing tops), or Tintamarre de boulingrin (Noise of the bowling-green).

This is the first CD of this guitar playing duo, both has earned their fame during the years in their skills of the guitar. On this CD we hear some improvising music with the guitar. We find 8 compositions with this improvising guitar play where they both explore the colour of the guitar in its different forms. Both play the guitar on a poetic way, with intonation on the sound colour that a guitar can produce. In the opening composition it starts with a Latin coloured composition where a second guitar build an improvisation around. This composition soon starts to get a quicker tune but ends again in a tranquil improvisation. In the second composition they work around the specific sound that the banjo produces combined with an exotic flute instrument. Again this composition receives its specific colour when they change the rhythms of the composition. In a third composition the guitars are played on a non-conventional way, it sounds more as plucking on the strings which produce short quick tunes. At the end Daniel adds some voice to the improvisation. In each composition they work with the guitar in these different ways, looking for the specific intonation a guitar can produce. 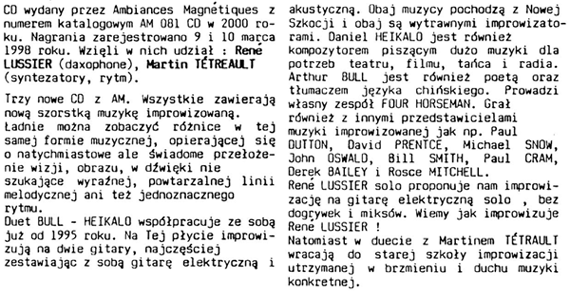 Nova Scotia (Canada) guitarists Arthur Bull and Daniel Heïkalo released Dérapages à cordes (Strings Skids), their first CD as a duo, in September 2000. Recorded between February 1996 and February 1999, this album introduced both musicians to a wider audience. Bull plays mostly on a semi-acoustic guitar, occasionally touching slide, ebow and prepared guitar. Heïkalo uses mostly acoustic and classical guitars (he plays percussion on two tracks). Guitar duets are far from common in free improv (why is that?) and if anything, Bull and Heïkalo prove how charmingly two avant-garde guitarists can converse. The former’s frenetic jagged strings of notes (reminiscent of René Lussier’s acoustic guitar playing) find the perfect mate in Heïkalo’s playing, more dreamy and strumming-based. Parts of L’intergiboulaison des mages infundibuliformes (this gibberish is impossible to translate) seem to follow similar inspiration, 25 years later, as Conventum on their first album À l’affut d’un complot, Other tracks like Tintamarre de boulingrin point to Derek Bailey, although the dual-guitar setting relates more closely to folk. Dérapages à cordes makes a strong album with a wide sound palette (thanks to percussion and prepared guitar appearing on a couple tracks). Definitely enjoyable.

Dérapages à Cordes makes a strong album with a wide sound palette (thanks to percussion and prepared guitar appearing on a couple tracks). Definitely enjoyable.