On the eve of the 114th anniversary of the hanging of the Franco-Manitoban Métis leader Louis Riel in Regina on 16 November 1885, double bass player Normand Guilbeault is launching his 2-CD work entitled Riel, Plaidoyer musical / Musical Plea, recorded in February at the Lion d’Or in Montréal.

The result of four years of diligent research, Riel, Plaidoyer musical / Musical Plea sheds new light on one of the little-known and most controversial episodes in Canadian history.

Accompanying the discs is a 72-page booklet that includes archival photographs of the period and texts, in English and French, by Louis Riel, Gabriel Dumont, commander of the Métis forces, Louis Schmidt, principal secretary to Riel, and Père André, who ministered to Riel during his last night.

With Riel, Plaidoyer musical / Musical Plea, Normand Guilbeault and his large group of outstanding musicians invite us to discover a historical and musical epic set on the Manitoban frontier. Original compositions, native chants, gigues, reels, songs of the period, military marches and improvisation are woven to create the fabric of a vibrant work that combines politics and poetry. Music, chants, political texts and poetry surprise, delight and assert without compromise. 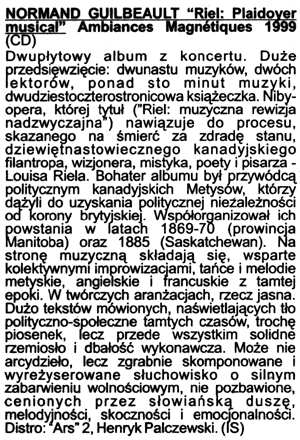 A patchwork of styles, including rousing native chants, French-Canadian songs, military marching themes, jazz and free improvisation, Riel appears, on first hearing, an uneven experience, though greater familiarity with Guilbeault’s polystylistic method reveals a work of considerable emotional power, rooted in the musical landscape of Riel’s time. Narrators (in English and French) speak for the principal participants in the action; the accompanying booklet contains relevant historical documents, but non-French readers will have problems understanding about half of this material. The improvising, which accounts for the radical aspects of the “soundtrack”, functions as superior mood music and is at its most dissonant when describing conflict or the threat of it. However, Lou Babin’s vocal and accordion improvisation on L’exil, one of the work’s highlights, is both lyrical and memorably poignant, later supported by the enchanting flute of Jean Derome. Batoche with its solemn processional tempo and eruptive military horns has an Ayleresque flavour. The excellent live recording matches the performance of a 12-piece ensemble which includes some of the finest musicians in Canadian New Music.