There is much to enjoy on Réflexions. — Rubberneck, UK

The classical guitar slept in its old case.

The one which has followed me in all my solitary travels.

You see outside but you look inside.

A reflection on life.

A moment in a life when what is fundamental questions our relationship with music.

A nervous arrival at the studio.

I could have recorded all this at home with the dripping faucet and the fridge.

Calm, magic of the alcove.

And now, the territory of the guitar reveals itself, the fingers tracing

Their paths along the strings.

The guitar speaks to you, unravels its notes like the reflections of a companion as it walks, in its infinite variations.

It pretends to be an orchestra, throwing its notes upon the lakes.

This chord which slips between the fingers like a habit.

Someone comes into the room for a moment.

She speaks to you of Spain, of elsewhere.

In the puddle, the world looks backwards.

And these fingernails which scratch the strings.

In the water of the microphones.

That’s it, it’s begun to sing.

It’s speaking to you.

Odd-one-out in this clutch of guitar-based records is André Duchesne’s Réflexions. By concentrating entirely on unaccompanied nylon string classical guitar, the disc constitutes something of a back-to-basics exercise from a man normally working in electro-acoustic music. The style is reflective and impressionistic, romantic tracings bringing to mind far away places in France and Spain. Despite a tendency to meander, there is much to enjoy on Réflexions, and an undeniably warm and soothing pool of sound bathes the ears. The palette inevitably seems limited and the techniques orthodox in comparison to other guitarists in this batch, but such a naked approach to music-making is commendably bold.

There is much to enjoy on Réflexions. 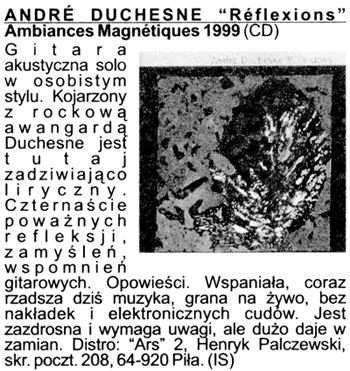 Tiens! Un vieux disque de Pink Floyd: «Is there anybody out there»…

With Réflexions, Montréal-based, classical guitarist André Duchesne presents tender solo musings. As the album title indicates, Duschene’s music is both reflective and deeply personal. It seems to speak of days gone by, of loves lost and so forth. The track titles are about all that’s given in terms of concrete commentary on the music. They are in French, of course, but here are a few translated: An Afternoon in Paris, Friday Evening in Andalusia and Straight Fingers, Soft Fingers. Réflexions is wonderfully evocative and communicative stuff. It leaves me in a decidedly more melancholy state after hearing it. I applaud monsieur Duchesne for his sensitive musical soliloquies.

This must be a release made out of love for the instrument.