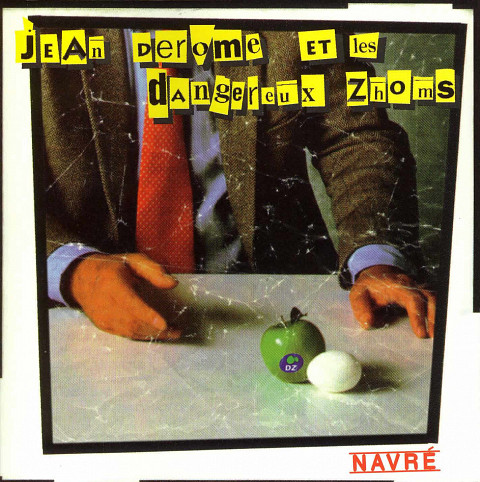 Like the Lounge Lizards, Derome and his crew are skillful handlers of both atmospheric and dynamics, grounding moody, meandering lead lines in steady, rocking rhythms… Finer group playing is hard to come by. — Option, USA

Group cohesion is outstanding, making light work of complex eclecticism. The more I hear it, the more I love it. — Rubberneck, UK

Navré is a sequel to Carnets de voyage, the previous Dangereux Zhoms outing, released in November 1994. It once again features a collection of pieces composed by Jean Derome, all written on his spiral notebooks while on tour. And as with any travel, the music found herein is full of surprises, rapid and unexpected changes, quick turns, movement, life! Each of the 8 pieces of this album takes us to a different universe, leads us quickly from one place, one atmosphere, one emotion to another, all with remarkable vivaciousness.

«Les Dangereux Zhoms is an explosive mix of 6 very different musical personalities, 6 colours which complete each other in a truly vivid and invigorating way. If I myself had Lussier’s precision, Cartier’s intensity, Tanguay’s vitality, Dostaler’s concentration and Walsh’s wit, I would not have had to create this group. Each interpreter takes an active part in the composition by modifying the phrasing, the dynamics, the shape and the choice of the improvisation at any moment. Each piece becomes a game. As in chess, it obeys specific rules and is constantly renewing itself. My job as composer and director is to create a common ground favourable to the birth of something very rare and very beautiful, namely, music. To all interested parties, the group is blossoming!» —Jean Derome.